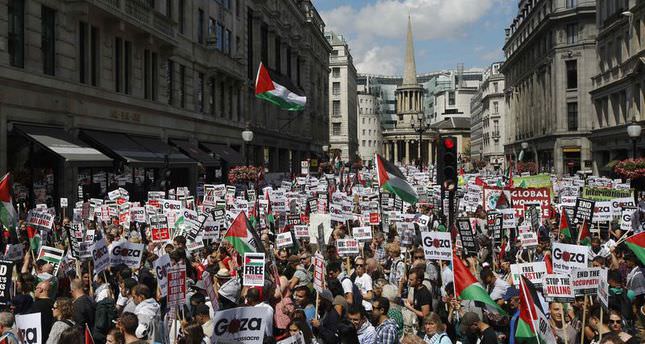 by AA Aug 09, 2014 12:00 am
Tens of thousands of protestors from across Britain have protested outside the BBC's headquarters in London to protest against Israel's onslaught on Gaza and the corporation's coverage of it.

The rally on Saturday, organized by an umbrella group of organizations including Stop the War Coalition, Friends of Al Aqsa and the Palestine Solidarity Campaign, continued with a march past the US Embassy in the British capital, where protesters shouted "Shame on you, U.S. and Obama!"

The demonstrators also marched through streets lined with police officers towards Hyde Park, carrying banners and placards declaring: "Silence is killing them", "Freedom for Palestine" and "End the siege".

Many protestors also called on the British government to stop supplying weapons and military equipment to Israel.

One demonstrator, British citizen Colin Bex, told Anadolu Agency (AA) that he believed the BBC had "not been broadcasting the truth for a while now" and "was doing the same thing over Gaza".

He said: "I am ashamed to be British, since former British Prime Minister Tony Blair and former U.S. President George W Bush gave support to the illegal invasion of Iraq."

He said that what was taking place in the Middle East were war crimes, and that these were supported by the UK and the US.

Another protestor, Philip McCowall, who had come from Bristol to attend the rally, told AA that appalling crimes were being committed in Gaza and that people were being slaughtered.

"The BBC has been broadcasting pro-Zionist reportage for years. There are so many Zionists working in there," he said.

The demonstration concluded peacefully and police made no arrests.

Israel has pounded the Gaza Strip for almost a month since July 7, killing at least 1,904 Palestinians and injuring 9,817 others.

Thousands of homes have also been destroyed in the offensive, named "Operation Protective Edge" by Israel.

Israel resumed its airstrikes on the Gaza Strip on Friday after the expiry of a three-day ceasefire with Palestinian factions.

The Gaza Strip, home to 1.8 million Palestinians, has been reeling under a crippling Israeli blockade since 2006, devastating the economy and badly affecting livelihoods in the coastal enclave.