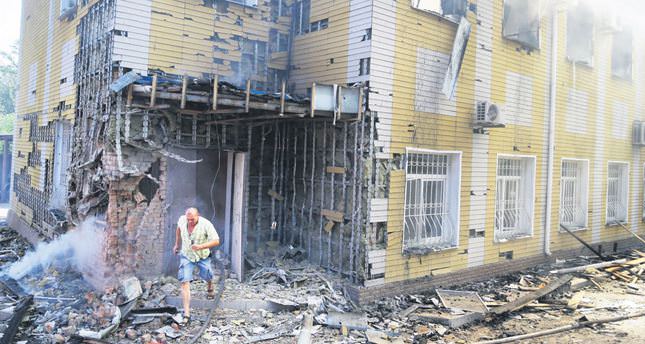 Pro-Russia separatist groups call on the Ukrainian government to declare a cease-fire as the rebels cannot combat the airstrikes, and the humanitarian situation continues to deteriorate

Ukraine's rebels are surrounded and ready to agree to a cease-fire to prevent a "humanitarian catastrophe," the insurgents' new leader said Saturday as conditions deteriorated in the rebel stronghold of Donetsk, artillery thundering through deserted streets. There was no immediate government response to the cease-fire statement.

Ukrainian troops have made steady advances against the rebels in recent weeks. "We are prepared to stop firing to bar the spread of the scale of the humanitarian catastrophe in Donbass (eastern Ukraine)," Aleksandr Zakharchenko, the so-called prime minister of the Donetsk separatists, said in a statement on a rebel website. His motive for offering a cease-fire was not clear but his comments could be aimed at increasing the pressure on Ukraine to allow in a Russian aid mission.

Russia has called repeatedly for a humanitarian mission into eastern Ukraine. But Kiev and the West suggest that could be just a pretext to send Russian forces into the region and say about 20,000 of them have gathered just across the border. Ukrainian President Petro Poroshenko issued a statement late Saturday saying that Ukraine is prepared to accept humanitarian assistance in eastern Ukraine. But he said the aid must come in without military accompaniment, it must pass through border checkpoints under Ukrainian control and the mission must be international in character.
Poroshenko said he and German Chancellor Angela Merkel discussed German participation in such a mission.

In Washington, the White House said President Barack Obama and Merkel agreed that any Russian intervention in Ukraine was unacceptable and would violate international law. Artillery reverberated Saturday across Donetsk, home to nearly 1 million people before 300,000 fled the conflict. "The situation is getting worse with every hour," Donetsk city council spokesman Maxim Rovinsky told The Associated Press.

At least one person was killed and 18 wounded in shelling that hit about 30 apartment blocks Saturday in Donetsk, he said, adding that about 2,000 residential buildings had no electricity. City streets were nearly empty of cars and pedestrians and most stores were closed. Explosions were also heard near Donetsk's airport.

Ukrainian officials have consistently denied that their forces are shelling civilians, but the rebels dismiss that and claim the government is aiming to blame the insurgents for the increasing death and destruction. Ukraine says the rebels have deliberately put rocket launchers in populated areas.
Some say both sides are to blame. "We're afraid of the Ukrainian army, which is firing on the city, and of the rebels of the Donetsk People's Republic, who are robbing and killing civilians," said Dmitry Andronov, a 47-year-old resident.

Zakharchenko's statement that the city was surrounded came hours after the rebels' top commander said Ukrainian forces had seized a key town, Krasnyi Luch, effectively cutting Donetsk and nearby territory off from the rest of the rebel-held east. "The Donetsk-Horlivka group of the fighters of Novorossiya is completely surrounded,"

Igor Girkin said on a rebel social media page. Novorossiya, or "New Russia," is a term widely used by the rebels for the eastern area that seeks independence from the government in Kiev. Horlivka, where rebels and Ukrainian forces are also fighting, is 30 kilometers (20 miles) north of Donetsk.

A spokesman for the Ukrainian military operation, Andriy Lysenko, told reporters Saturday that he could not confirm that Krasnyi Luch was under government control.

Concerns were also rising about a possible humanitarian catastrophe in the rebel's secondlargest city of Luhansk, where fighting has been heavier and more prolonged. A map released by the Ukrainian military showed Ukrainian forces near the outskirts of Luhansk on three sides, with an opening to other rebel-held territory only to the south.

Russian news agencies quoted Luhansk authorities as saying Saturday that the city has been without water and electricity for a week and most of its stores were closed.

Obama and British Prime Minister David Cameron also spoke by telephone on Saturday about Ukraine. "Both expressed grave concern about reports that Russian military vehicles have crossed the border into Ukraine and that Russian armed forces are exercising for a 'humanitarian intervention'," said a statement from Cameron's office. Both "are absolutely clear that such a socalled humanitarian mission would be unjustified and illegal."

The deputy head of the Ukrainian presidential administration, Valeriy Chalyi, said Saturday that Russian forces wanted to enter Ukraine under the guise of a humanitarian mission but Ukraine had blocked the move. Kremlin spokesman Dmitry Peskov denied the report, saying "there was no attempt by Russian soldiers at penetration," according to Russian news agencies. But he reiterated Russia's call for humanitarian action, saying "this catastrophe now is the No. 1 theme for discussion."

The International Committee of the Red Cross said it was working to alleviate the crisis in eastern Ukraine but warned that any Red Cross aid convoy "will be taken in strict adherence to our fundamental working principles of neutrality, impartiality and independence."

A White House statement said Biden and Poroshenko agreed that if "Russia were serious about improving the humanitarian situation in eastern Ukraine," it had to immediately stop shelling Ukrainian troops, release Ukrainian hostages being held inside Russia and cease providing weapons to pro-Russia separatists in Ukraine.

In the Ukrainian capital of Kiev, city workers and volunteers removed the last of the barricades that had blocked the city's main street since anti-government protests began in November.

Protesters had erected the barricades to protect a sprawling tent camp on the city's main square. Although the camp's size dwindled sharply after pro-Russian President Viktor Yanukovych fled the country in February and a new government came to power, a determined core of demonstrators remained. Yanukovych's ouster precipitated the crisis in Ukraine's east, which was his support base. Fighting began in April, after Russian President Vladimir Putin annexed Ukraine's Russianspeaking Crimean Peninsula.
Last Update: Aug 11, 2014 1:50 am
RELATED TOPICS