No songs of praise for France's Hollande as he turns 60 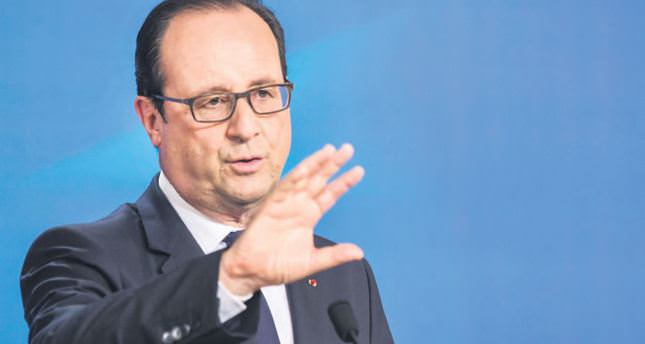 by German Press Agency - DPA
Aug 12, 2014 12:00 am
When Angela Merkel turned 60 in mid-July, she was showered with flowers, tributes and a flurry of articles praising the legacy of Germany's much-loved "Mutti." The fact that Germany had just been crowned the 2014 World Cup champions was the icing on the cake. Many commentators drew parallels between the reconstruction of the football team, and that of the German economy under Merkel.

On Tuesday, the spotlight swings to France, where Francois Hollande will also turn 60. But unlike Merkel, who was treated to a rendition of "Happy Birthday" from an admiring German reporter, there will be few people singing the praises of the beleaguered French president. The Socialist leader's approval ratings, like the economy, are stuck in the doldrums. A CSA opinion poll published on Aug. 7 showed only 23 percent of voters trusting him to tackle the country's challenges.

Hollande's unpopularity is directly proportional to the unemployment curve. Each month brings its grim tally of the newly jobless, making a mockery of his promise to stop the economy shedding jobs by Dec. 2013, and confirming the view that France is Europe's sick man. In June, the number of unemployed in mainland France rose to a new record of 3.4 million.

With economic growth expected to fall short of a target of 1 percent this year, the jobs picture is expected to remain bleak into 2015. "The absence of economic results is something that weighs very heavily in the judgment of Francois Hollande," CSA pollster Yves-Marie Cann told DPA. "More than two years into his mandate, France is still in economic crisis."

Hollande's critics accuse him of ducking the unpopular reforms needed to retool French industry, and help it compete in a global marketplace.
His fall from grace came within a few months of his election in May 2012 on a promise to be a "normal president." For Christophe Barbier, editor of L'Express news magazine, Hollande is hobbled by that image of a president among equals. "There's a sort of carnal link between the French and their president. It's almost religious,"

Barbier told DPA. "With Francois Hollande, that link was broken very, very quickly. Not because he was a normal president, but because he was too normal, and showed a sort of limitation, as if he were not equal to the task."

This summer, the rot spread to Hollande's foreign policy, which had been seen as a rare area of daring and success following his intervention against Islamist militants in Mali. The French leader stunned leftist voters at the start of Israel's offensive in Gaza by adopting a staunchly pro-
Israel line that broke with France's tradition of neutrality in the conflict. On the crisis in Ukraine, France - which is building two warships for Russia
- has been conspicuously silent.
Last Update: Aug 12, 2014 2:12 am