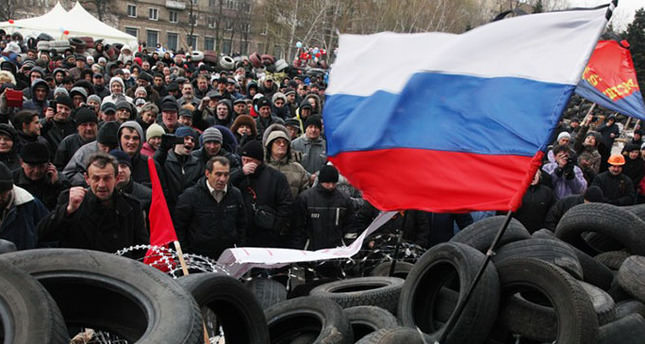 by Begüm Tunakan Aug 12, 2014 12:00 am
Ukrainian government will deny access to a convoy of 280 Russian trucks reportedly carrying aid for the war-torn east to enter Ukrainian territory, suspecting that the Russian mission "could be a covert military operation." "We will not consider the possibility of any movement of the Russian column on the territory of Ukraine," said Valeriy Chaly, Ukrainian deputy head of the presidential administration, stressing that any aid should be certified by the International Committee of the Red Cross (ICRC) and that no Russian personnel escorting the Russian convoy would be allowed to enter the territory. He stipulated that all Russian aid will have to be loaded onto Ukrainian trucks at the border and that "[the Ukrainian government] will not allow any escort by the Emergencies Ministry of Russia or by the military."

Geneva-based human rights organization, ICRC had already been informed about the Russian initiative to hand over the assistance to civilians in areas affected by the heavy fighting. In a statement given on Monday, the ICRC also said that it would support the Russian mission while being "ready to facilitate such an operation with the involvement, endorsement, and support of all sides concerned."

Russian President Vladimir Putin said on Monday that Russia is sending a humanitarian aid convoy to eastern Ukraine in cooperation with the ICRC because the humanitarian situation has gotten worse and the plight of the people in need of humanitarian assistance and protection is worsening as a result of the ongoing conflict. However, before the Russian aid trucks left Moscow, Russian authorities did not give any practical details of the operation, such as what the Russian aid trucks were carrying and where the aid would be delivered to civilians. This caused growing concern in Kiev and the West over Russia's possible invasion of eastern Ukraine.

Since heavy fighting between rebel groups and government forces erupted, the Ukrainian government and Western leaders have accused Russia of backing rebel groups with tactical assistance and arms. It was reported earlier Tuesday that the Russian mission convoy, which allegedly includes hundreds of tons of grain, baby food and medicine, left Moscow to enter Ukrainian territory in order to help civilians trapped in the area where fighting between separatists and government forces has claimed more than 1,300 lives since April, according to a U.N. report. This statement worries both Kiev and the West over a possible Russian invasion of eastern Ukraine where fighting has increased recently.

The sharp increase in fighting between pro-Russian separatist rebels and the Ukrainian army to take control of eastern Ukraine has caused a significant number of Ukrainians to find shelter from the war. Many have been forced to flee to the other parts of the country or chose to cross into neighboring Russia. For those who have stayed, the humanitarian situation has gotten worse since Kiev's "anti-terrorist operation" was launched several month ago.
Last Update: Aug 12, 2014 11:50 pm
RELATED TOPICS