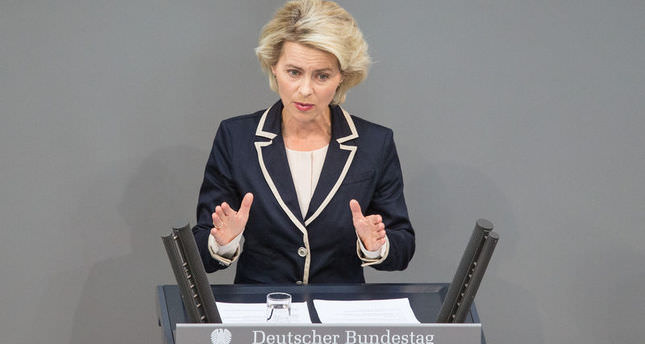 by AA Aug 13, 2014 12:00 am
Germany has announced plans to supply non-lethal military equipment to Iraq's Kurdish regional government, to support it in its fight against self-proclaimed Islamic State (ISIS) militants.

"Under international law, the Iraqi government has officially asked for help and it will be the receiver," Defense Minister Ursula von der Leyen told public television ARD on Wednesday.

She underlined that no armaments would be sent, just non-lethal military equipment - such as beds, tents, helmets and military vehicles.

Asked if Turkey would be used as a supply channel, Von Der Leyen said that as a neighboring country it could be very helpful.

"Turkey is also geographically important when - for example - one needs a base to initially transport the supplies, and then to transport them from there to northern Iraq under the protection of aircraft," she said.

Earlier, this week the government ruled out supplying arms to Iraq's Kurds in their fight against the ISIS.

"The government remains committed to the principle of not supplying any arms to war and conflict zones," spokesperson Steffan Seibert told reporters Monday. "Our focus is to supply as quickly as possible concrete humanitarian aid to the people there who are in dire need."

Armed groups linked to the ISIS, captured Iraq's Sinjar and Rabia in the Nineveh province last week after fierce clashes, forcing thousands of Iraqis including Turkmen, Arabs and Ezidis to flee.

U.S. State Department Spokesperson Marie Harf told reporters Monday that the U.S. is supplying weaponry to the Kurdish Peshmerga forces who are in need of additional arms as the ISIS militants recently obtained some heavy ones.
Last Update: Aug 13, 2014 3:42 pm
RELATED TOPICS