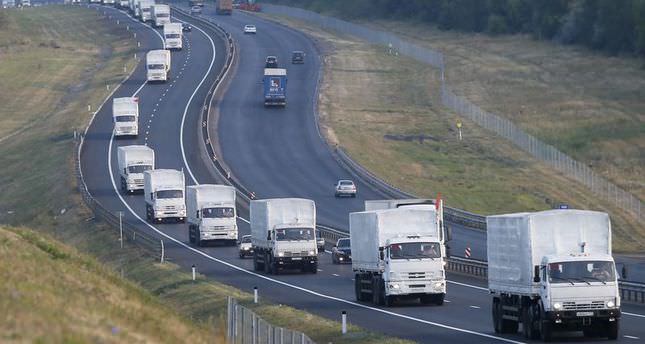 by Aug 14, 2014 12:00 am
A massive Russian aid convoy bound for civilians in eastern Ukraine was pushing toward the embattled city of Luhansk on Thursday, amid fresh accusations from Kiev that Moscow was not cooperating with international organizations.

The almost 280 lorries with 2,000 tons of food and medicine were moving some 100 kilometers north of the Russian town of Kamensk-Shakhtinsky, a European Press Agency photographer said.

Kamensk-Shakhtinsky is close to the Izvarino border post, which has seen heavy fighting between rebels and government forces.

Izvarino lies 50 kilometers from Luhansk, where more than 200,000 people have been cut of from water and electricity for 12 days.

Luhansk authorities said many civilians were killed in artillery fire on Wednesday, but exact casualty figures were not yet available.

Russian officials did not say where the convoy was and state media only reported that it was moving on Russian territory.

Ukraine complained that Moscow was not coordinating the convoy with anybody. Valeriy Chaly, a deputy chief of staff of President Petro Poroshenko, said that the International Committee of the Red Cross (ICRC) had received incomplete lists of the convoy's load.

Kiev, which fears the convoy is a pretext for an invasion, initially insisted that Russia hand over the goods to the Red Cross before the border and that the vehicles then pass into government-held territory near the city of Kharkiv.

However, Poroshenko's spokesman Sviatoslav Tseholko said Wednesday that the convoy could pass into rebel-held territory near Luhansk if Ukrainian officials and representatives of the Organization for Security and Co-operation in Europe inspect it and that ICRC staff would only deal with the distribution.

Chaly also claimed that Ukraine prevented an attempt by "peacekeepers" to cross the border from Russia near Kharkiv late on Wednesday. He stressed that Ukraine would not tolerate any Russian peacekeepers to escort the aid convoy.

Russian President Vladimir Putin was expected to address Russian lawmakers in Crimea later on Thursday and spell out Moscow's future policies in the conflict with Ukraine.