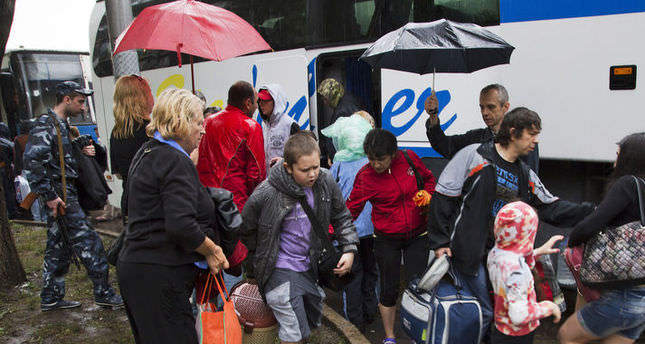 The Moscow administration is imposing an old tactic of 'Russianization' of Turkic minorities by placing Russian-speaking Ukrainian refugees in Turkic-speaking areas.

The Soviet strategy of creating a single Russian nation is sustaining itself in light of Moscow's decision to settle ethnic Russian refugees who have been displaced by the ongoing crisis in eastern Ukraine in Turkic-Muslim republics. Up to 5,000 displaced ethnic Russians from eastern Ukraine, a region where brutal heavy fighting has continued to threaten civilians' lives, were settled in Bashkortostan, a Turkic speaking Muslim republic in the Middle Volga, instead of predominantly Russian regions. Moscow's decision to direct ethnic Russians into non-Russian republics has certainly raised doubts over the underlying reason for Moscow's recent strategy that is seen as similar to Russianization policies during the Stalinist period.

Most ethnic Russians have left eastern Ukraine due to security concerns including "fears of persecution for their political views or ethnicity, while others are worried about forced recruitment" by rebel groups. Displacement in rebel-held eastern Ukraine has resulted from the conflict between Ukrainian forces and pro-Russian separatists aligned with the self-proclaimed Donetsk and Luhansk people's republics. According to United Nations refugee agency (UNHRC) reports, "168,677 displaced people applied to the [Russian] Federal Migration Service in the first seven months of this year. These included 6,347 for refugee status, 48,914 for temporary asylum, 28,134 for citizenship, 59,858 for temporary residence, 19,943 for residence permits and 5,481 under the program of resettlement of compatriots."

As a large part of displaced Ukrainians have preferred a temporary stay in Russian territories — while currently residing in the border areas — many have sought to return, especially after the Ukrainian army retook control of eastern territories and the separatists withdrew from their positions. It is highly questionable why Moscow sent the refugees to a region that is thousands of kilometers away.

The Soviet government carried out Russianization policies by spreading Russian people into Turkic speaking Muslim republics of the Russian federation. This government policy was applied in order to change the ethnic balance in non-Russian regions, thereby expanding state control in these regions to a certain extent. This is also a distinct process, as it does not involve cultural assimilation policies through a change in language or self-identity of non-Russian peoples to being Russian. However, in the long term, due to the long exposure to the Russian language and culture, many Russian elements would inevitably influence cultural elements that would lead to changes in the identity and language of the non-Russians groups.

As Russian authorities are sending Russian people into the Bashkortostan autonomous region, Moscow's decision to use ethnic Russians appears to be part of a broader strategy to shift the ethnic balance to maintain extensive control over non-Russian regions of the federation. Bashkortostan is a predominantly Muslim autonomous region in the Volga-Urals region of Russia that was established in 1919 via Soviet efforts to form a national identity for Bashkirs. Education is primarily in Russian and Bashkir, who are Russian-speaking people, Russian-language education and literature were sent into places as part of a Russianization policy to maintain control over the region.

"The Russian republic of Bashkortostan is an important industrial region for the Russian authorities in which many industrial plants and major oil refineries were found. Even if it was founded as an autonomous region, we can see that the current policies applied during Putin's Russia provided limited regional autonomy. Since the president of Bashkortostan is appointed by the Russian president, we cannot talk about the autonomous region anymore," said Assistant Professor Vugar Imanbeyli from Istanbul Şehir University, reiterating Moscow's centralized government policies to increase its influence regarding the expansion of its control over non-Russian regions.

Azade Ayse Rorlich asserted in his book titled "The Volga Tatars: A Profile in National Resilience" that the establishment of an autonomous Turkic region was supported by the Soviet authorities as it would "prevent Turkic unity and the emergence of a dynamic republic in the middle of the Volga, [as such] the Soviet government chose to sponsor the formation of smaller republics; by doing so, it also fostered isolation and even nourished old jealousies and rivalries, thus facilitating its control over the peoples of the [region]." In light of Rorlich's explanation, the autonomous Bashkir republic was formed as part of a Soviet strategy of "divide and rule" to control the Turkic peoples in the country.

The best example of Soviet Russia's Russianization policy toward non-Russian Muslim majority regions is when Moscow sent Armenians in parts of the Armenian Soviet Socialist Republic of Armenia while expelling Azerbaijanis from the region, an action that is still causing troubles in the southern Caucasus. The Armenian settlement in the Nakhichevan exclave, which is separated by Armenia but is a part of Azerbaijan, is still having repercussions in the region.

The Crimean Tatars, who are the oldest residents of the Crimean peninsula where the vast majority of whom are ethnically Russian, have long been subjected to brutal Soviet policies. As the Soviet Union dispersed millions of ethnic Russians and Russian speakers outside the borders of today's Russian Federation as a strategy to shift the ethnic balance in non-Russian regions, many Crimean Tatars have been subjected to Soviet policies that would inevitably Russify their cultural values.

Russians are the vast majority in Crimea with five million ethnic Russians residing in the Ukrainian part of Novorossiya due to Russification policies applied during Soviet times. The mass deportation of Crimean Tatars in 1944 also led many to fear Russian policies, as they felt threatened by the annexation of Crimea.

Meanwhile, Russian President Vladimir Putin announced on Thursday that a Russian military task force would be established in Crimea as part of Moscow's strategy to expand Russian hegemony, especially in regions where the majority of the population consists of ethnic Russians like Crimea. "The [Russian] Defense Ministry prepared ... a separate program for the creation and development of military forces in Crimea. I approved this program," Putin said on a visit to the Black Sea peninsula. "It will not be excessive, it will not be expensive," he added.