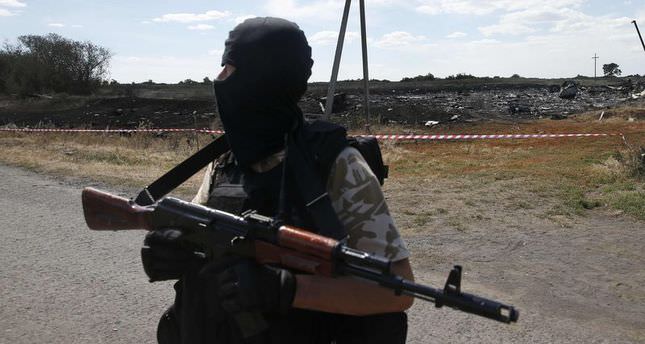 by Associated Press Aug 18, 2014 12:00 am
Ukraine claimed Monday that rebels in the east of the country fired rockets and mortars on civilians trying to flee from the region's intense fighting.

"Many people were killed, among them women and children," Col. Andriy Lysenko, a spokesman for Ukraine's national security council, said at a briefing. He did not say how many people or vehicles were in the convoy.

The barrage took place between the towns of Svitlivka and Khrashchuvate, which lie on the main road leading from the besieged city of Luhansk to Russia. There were no immediate further details.

That road is likely the one that a convoy of Russian humanitarian aid would take if Ukraine allows it into the country.

The International Committee of the Red Cross, which is to take responsibility for the aid convoy when it enters Ukraine, has demanded security guarantees from all sides, including the rebels, for the mission. As of midday, there was no indication that the guarantees had been given.

Russia's foreign minister earlier said he expects the extensive humanitarian aid mission for eastern Ukraine to enter the country in the near future.

Speaking at news conference in Berlin, where he met a day earlier with his counterparts from Ukraine, France and Germany, Sergey Lavrov said Monday that all questions regarding the mission had been answered and that agreement had been reached with Ukraine and the ICRC. It was not clear if Lavrov was referring to the security guarantees.

The humanitarian aid convoy from Russia has been watched with suspicion by Ukraine and Western countries, who suggest it could be used to spirit in weapons for the separatists, who are gradually losing ground to Ukrainian forces.