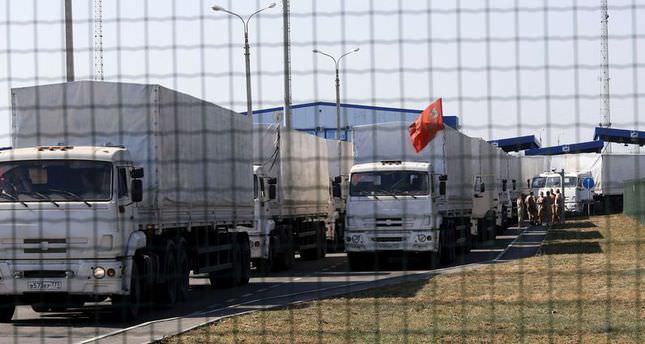 by Aug 25, 2014 12:00 am
Russia wants to send a second humanitarian aid convoy to eastern Ukraine, Foreign Minister Sergei Lavrov said on Monday, introducing a likely new topic of discord on the eve of crucial talks between the two countries' leaders.

Ukraine and its Western allies denounced the arrival of a first huge convoy that crossed the border last week without Kiev's permission. But Lavrov said more aid was needed to ease the plight of civilians caught up in four months of fighting between pro-Russian separatists and the Ukrainian military.

"The humanitarian situation is not improving but deteriorating," Lavrov told a news conference. "We want to reach an agreement on all conditions for delivering a second convoy by the same route... in the coming days."

He was speaking a day before talks in the Belarussian capital Minsk, where Russian President Vladimir Putin and his Ukrainian counterpart Petro Poroshenko will come face to face for the first time since early June.

The first convoy of more than 200 Russian trucks crossed into Ukraine last Friday, prompting the Ukrainian state security chief to denounce it as "a direct invasion". The trucks withdrew again at the weekend and Lavrov said the aid was now being distributed.

Ukraine and Western governments have repeatedly accused Russia of arming pro-Moscow separatists who took over parts of eastern Ukraine in April and are still holding out in the face of a steady advance by Ukrainian government forces.

Kiev accused Russia on Monday of trying to open up a second, southern front against its forces. It said Russian forces in the guise of separatist rebels had crossed into Ukrainian forces with armour.

Russia denies sending weapons and fighters into Ukraine, where more than 2,000 people have been killed in the fighting.

Lavrov said that in Tuesday's talks, where the European Union will be represented by its foreign policy chief Catherine Ashton, the West should not put the onus on Moscow to come up with solutions.

"I hope very much our Western colleagues... won't just come with expectations we will somehow magically solve things for them. That will not work," he said.

German Chancellor Angela Merkel cautioned on Sunday against expecting any breakthrough in the crisis, which has plunged relations between Russia and the West to their lowest point since the Cold War.

Lavrov did not lay out any new Russian proposals but said Moscow wanted to see the implementation of previous agreements that he said had been ignored: a ceasefire without pre-conditions, and an 'all-national dialogue' between the Ukrainian government and all the country's regions.

He said the West should urge the Ukrainian side "to recognise their responsibility for their own country and to understand it's not a fight between Ukraine and Russia but a fight for a Ukrainian state in which everyone can live comfortably", including Russians, Ukrainians and members of other minorities.

"I'm convinced...if we all consider the interests of Ukraine then Russia and Europe, as its biggest partners, can really help overcome the present crisis," he said.

Russia accuses the Ukrainian government of spurning dialogue with the rebels and attacking civilian areas. Lavrov said there had been damage to schools, kindergartens, hospitals, markets and churches. "This can't be put down to inaccurate fire and to chance," he said.