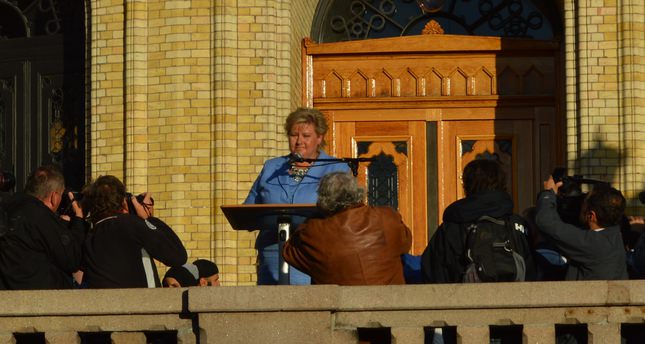 by Daily Sabah with Agencies Aug 26, 2014 12:00 am
Thousands of people from all walks of life gathered outside the Norwegian capital's Parliament building late Monday to show contempt for statements made by a spokesperson for the self-proclaimed Islamic State of al-Sham (ISIS) who had defended decapitation "as a way of executing war criminals."

"A good society is built when we show that we disagree with and loathe organizations such as ISIS," said Solberg. Norwegian Prime Minister continued her speech by quoting Prophet Mohammad saying "If one of you sees something wrong, let him change it with his hand; if he cannot, then with his tongue; if he cannot, then with his heart and this is the weakest faith."
Last Update: Aug 26, 2014 4:09 pm
RELATED TOPICS