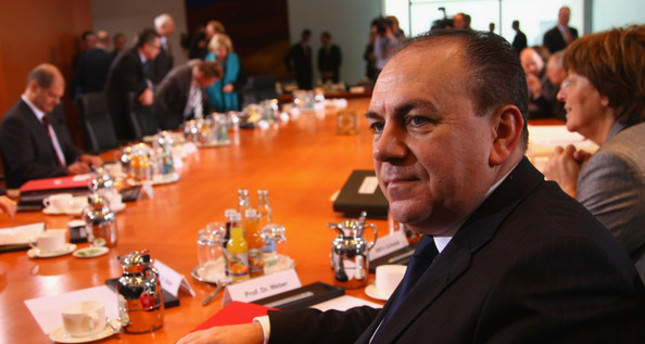 by Daily Sabah Aug 29, 2014 12:00 am
The German cabinet approved a draft law giving federal prosecutors bigger roles in cases with racist, xenophobic and other inhuman motives on Wednesday. The draft law of Minister of Justice Heiko Maas (SPD Party) will fulfill the recommendations of a parliamentary report on racist murders of the National Socialist Underground (NSU) in 2011. Federal prosecutors could investigate serious crimes such as murder only if they present a danger to the internal security of Germany.

The discovery of the neo-Nazi cell of the NSU brought to light the undetected murders of eight Turks, a Greek and a policewoman in Germany between 2000 and 2007. The murders shocked the society and triggered criticism of the country's intelligence service. Since May 2013, 39 year old Beate Zschaepe has been on trial for being a member of the NSU cell and for complicity in the murders. She faces life imprisonment. The authorities failed to view the murders as racist crimes and to link the shootings, which were all carried out with the same gun.

The police focusing their investigation on the personal lives of the victims assumed the killings must be due to feuds within the Turkish underworld. Last week, a parliamentary report in Thuringia, the state in which the NSU was formed, labeled the police investigation a "fiasco." It said the police "did not pursue information insistently" and "massively underestimated the growing violence of the militant far right." According to the government the draft law courts will in future be asked to pay more attention to racist and xenophobic motives when it comes to punishments.

Concerns over the acts of the far-right triggered more attacks against mosques in Bielefed and Berlin two weeks ago. In Bielefeld, a perpetrator broke into two mosques and burned books including Quran and a prayer rug. A fire broke out also in an unfinished extension of the Mevlana Mosque in Berlin Krezuberg.

On Aug. 15, Muslim Turks protested the act after the Friday prayer and declared their expectations for measures to combat Islamophobia. A police spokesman of Berlin said on Wednesday to the DPA that a technical fault had been ruled out and the fire is being treated as a case of presumed arson. According to the response of the federal government to a parliamentary question, the number of attacks on mosques increased significantly, from an average of 22 per year from 2001 to 2011 to 35, and 36 in the years 2012 and 2013.

According to a spokesman for the Interior Ministry who spoke to Neuen Osnabrücker newspaper, federal and state police authorities assume that in 746 cases evidence "for a possible political-right motivation" exists. Between 1990 and 2013 at least 152 people have lost their lives due to acts of right extremists according to research by the ZEIT, the Tagesspiegel and Time Online. Officially, only 63 of them have been recognized as victims of rightwing violence so far.
Last Update: Aug 29, 2014 1:43 am
RELATED TOPICS