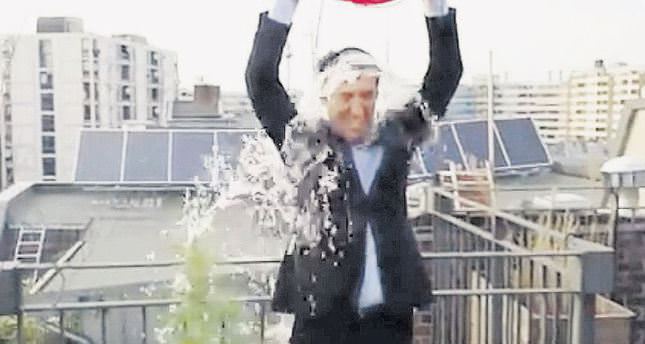 by Daily Sabah Aug 30, 2014 12:00 am
Green Party co-leader Cem Özdemir's video for the ice-bucket challenge started a debate on the legalization of marijuana in Germany. The party leader is seen beside a cannabis plant in this video, where he was filmed on a balcony in Kreuzberg, Berlin. In Germany, the cultivation and possession of cannabis is illegal according to narcotic laws.

Özdemir participated in the icebucket challenge campaign, made to raise awareness of a neurodegenerative disease called ALS, with a video on the YouTube page of the Green Party last week. A cannabis plant, which is used to produce hashish and marijuana, was next to him in the video, while he was pouring a bucket of ice water over his head for charity. Özdemir admitted that the plant is cannabis after debates by Internet commentators in social-media. He said, "It wasn't standing there by accident," and wanted to add "a gentle political statement" to the campaign. Özdemir defended his position by telling the Westdeutschen Allgemeinen Newspaper (WAZ), "Whether someone wants to consume cannabis and the associated risks, citizens over 18 years should decide for themselves in a free society."

According to Federal German Police (BDK), Özdemir violated the narcotics act of the country by possessing a hemp plant. BDK national chairman André Schulz commented to DPA that apparently Özdemir did not notice the plant in the video and attempted to justify it as an act of drug liberalization. "But the law is relatively clear," Schulz said. A police spokesman for the Berlin public prosecutor told WAZ, "Possession of prohibited narcotics is a violation of the narcotics law. It makes no difference whether the case arises from an ordinary citizen or a top politician." However the police can only make investigations if the Bundestag lifts the immunity of deputy Özdemir.

That German environmentalist Green Party works for the legalization of marijuana is already known. Berlin Green MP Hans-Christian Ströbele, launched a campaign for cannabis consumption more than a decade ago.
Last Update: Aug 30, 2014 1:42 am
RELATED TOPICS