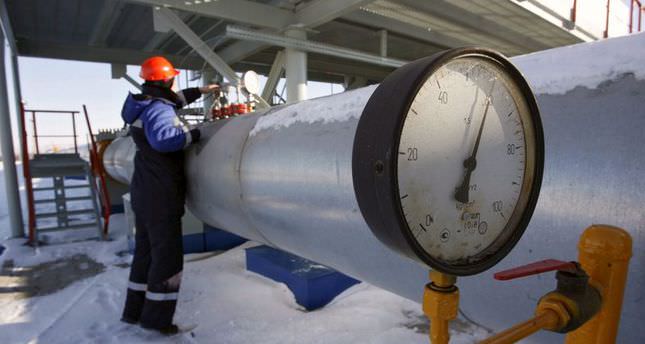 by Sep 01, 2014 12:00 am
The European Union could ban gas exports and limit industrial use as part of emergency measures to protect household energy supplies this winter, a source told Reuters, as it braces for a possible halt in Russian gas as a result of the Ukraine crisis.

Russia is Europe's biggest supplier of oil, coal and natural gas, and its pipelines through Ukraine are currently the subject of political manoeuvering - not for the first time - as Europe and Moscow clash over the latter's military action in Ukraine.

Kiev is warning that Russia plans to halt gas supplies while Moscow says Ukraine could siphon off energy destined for the European Union - which has just threatened new sanctions if Moscow fails to pull its forces out of Ukraine.

While buyers of oil and coal can find new suppliers relatively quickly, southeast Europe receives most of its gas from Kremlin-controlled Gazprom.

Tankers from Qatar and Algeria bring liquefied natural gas (LNG) to Europe via ports along the Atlantic and Mediterranean oceans, but European buyers often re-sell those cargoes abroad for higher prices rather than supplying their domestic market.

A source at the EU Commission said it was considering a ban on the practice of re-selling to bolster reserves.

"In the short-term, we are very worried about winter supplies in southeast Europe," said the source, who has direct knowledge of the Commission's energy emergency plans.

"Our best hope in case of a cut is emergency measure 994/2010 which could prevent LNG from leaving Europe as well as limit industrial gas use in order to protect households," the source said.

European Energy Commissioner Guenther Oettinger said last week during negotiations with Ukraine and Russia that the bloc was preparing a "Plan B" to protect gas supplies in the worst case scenario.

Hungary, likely to be among the countries most affected by a cut in supplies, said it was monitoring the need for further increases in strategic reserves. The Development Ministry told Reuters it was also looking at "potential regulatory methods that would prompt market players to build reserves beyond the regulatory minimum."

European utilities have been preparing for a supply cut by injecting as much gas as possible into storage and as a result, the region's storage facilities are filled to 90 percent, or 70 billion cubic metres (bcm), equivalent to 15 percent of Europe's annual demand.

Whatever the bloc does, it will struggle to compensate fully if Russian gas stops coming to Europe, political and industry sources say. Gas prices have risen 35 percent since July due to this threat.

Russia meets around a third of EU demand for oil, coal and natural gas, according to EU data. In return it receives some $250 billion a year, or around two-thirds of government revenue.

The problem with a potential cut is that continental Europe's pipeline infrastructure was built from East-to-West in order to import Russian gas.

Efforts to build more supplies going the other way, such as LNG from Atlantic terminals, are not sufficiently developed to meet this winter's demand in southeast Europe.

European energy suppliers could use more coal: that market is over supplied as a result of slowing Asian demand and improvements in mining output from exporters in Colombia, Australia and South Africa. U.S. coal miners are also looking for new buyers since the North American shale gas boom has pushed most coal out of the U.S. market.

All this has caused a 40 percent coal price drop in the past three years.

Again however, the problem is infrastructure: large parts of central and eastern Europe rely on district gas heating, which means burning coal to generate electricity will not help keep households warm this winter.

Russia has halted gas flows to Ukraine three times in the past decade - 2006, 2009 and since June this year - because of price disputes with Kiev, although this year gas intended for customers in the EU have so far continued to flow via Ukraine.

Gazprom insists it has been a reliable supplier and that flows to Europe were in the past disrupted only after Ukraine took some gas intended for the EU to meet its own demand.

With Europe now at odds alongside Ukraine against Russia, the impact of any future shut-down may be more marked.

"We believe the Ukrainian situation will not be resolved without a transit interruption (and) prices would be likely spike," said analysts at French bank Societe Generale.