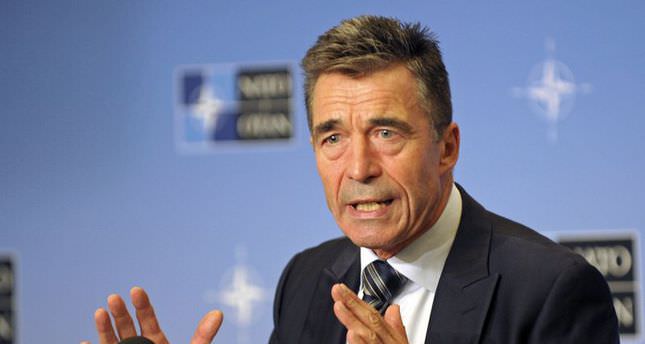 by AA Sep 01, 2014 12:00 am
NATO will bolster its defenses in Eastern Europe following Russia's actions in Ukraine, announced its secretary-general.

Secretary-General Anders Fogh Rasmussen announced a "Readiness Action Plan" in response to Russia's aggressive behavior in Ukraine, in a press conference in Brussels on Monday, ahead of a NATO summit meeting in Wales on September 4-5.

"The Readiness Action Plan will ensure that we have the right forces and the right equipment in the right place, at the right time," Rasmussen said. "That also means a more visible NATO presence in the East for as long as required. And it will make NATO fitter, faster and more flexible to adjust to all kinds of security challenges."

"The Readiness Action Plan responds to Russia's aggressive behavior - but it equips the Alliance to respond to all security challenges, wherever they may arise," he added referring to the "overt Russian intervention in Ukraine."

He also said that the organization would upgrade its intelligence gathering and sharing, as well as update defense plans and enhance its training schedule.

"Our Summit in Wales this week will address the challenges of a changed world. And so I expect it to be a crucial summit in NATO's history," Rasmussen added,

NATO officials will meet with Ukrainian President Petro Poroshenko at the summit.