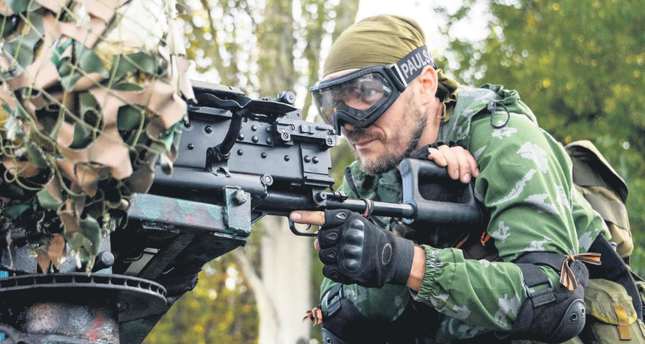 Russia threatens Ukraine over invading its territories, violating Ukraine's territorial integrity and international law, while NATO prepares to sharpen its reaction to Russian intervention in the Ukraine crisis

Following claims over a Russian invasion in eastern Ukraine, Russian President Vladimir Putin made a provocative statement warning the European Commission President Jose Manual Barroso over the possible Russian invasion of Ukraine, saying that Russian forces could march to Kiev and take over the capital city "in a fortnight."

As Russian-backed separatists started to make significant gains in the east of the country after Ukrainian forces had pulled back from the airport near Luhansk. The growing Russian threat to the Western world has sparked reactions. "A great war arrived at our doorstep, the likes of which Europe has not seen since World War II," Ukraine's Defence Minister Valeriy Geletey wrote on Facebook, while accusing Russia of launching a "great war" against Ukraine and Western countries.

The U.N. Secretary General Ban Ki-moon stressed his concern over the deteriorating situation in eastern Ukraine during his visit to New Zealand on Tuesday, saying "I know the EU, the Americans and most of the Western countries are discussing very seriously among themselves how to handle [the Ukraine crisis]." He also called on all parties to form "a political dialogue for a [more sustainable] political solution."

With regard to Russia's aggressive behavior over the Ukraine crisis, NATO is set to create high-readiness forces along with The Readiness Action Plan in order to be deployed in the NATO-member nation in 48 hours against a possible outside threat. The military equipment would be ready to use, as the stockpile would be stored at bases in Eastern Europe. "The Readiness Action Plan will ensure that we have the right forces and the right equipment in the right place, at the right time," NATO's secretary general Anders Fogh Rasmussen said on Monday. "Not because NATO wants to attack anyone.

But because the dangers and the threats are more present and more visible. And we will do what it takes to defend our allies," he added.The Western military alliance's new plan will be discussed in a two-day summit in Wales between Sept. 4-5. Since the Russian annexation of the Crimean Peninsula in late March, many Eastern European members of NATO have demanded a more active role from the alliance in order to defend their country against the possible Russian threat.

The NATO's border reinforcing policy in Eastern Europe received a significant reaction from Russia, as the deployment is certain to be seen as provocative by the Russian government. This led Russia to adapt a military strategy over aggravating tension between NATO and Russia. Russia has long been considered a NATO presence in Eastern Europe and the situation in Ukraine as a significant danger to Russia's security. "The fact that the military infrastructure of NATO member states is getting closer to our borders, including via enlargement, will preserve its place as one of the external threats for the Russian Federation," Mikhail Popov, the deputy head of the Kremlin advisory security council, said in an interview with RIA Novosti Russian news agency.

Considering the Ukrainian crisis, Russian President Putin held Ukraine responsible for the deteriorating situation in eastern cities and villages. At the Belarus meeting held on Monday between Ukraine, rebel forces and Russia, Putin answered the BBC's John Sweeney's questions over the Ukraine crisis. Putin asserted that the overall aim of Russian troops along the Ukraine border was to protect civilians from the heavy clashes between pro-Russian rebels and Kiev forces. He also blamed Ukraine for the failure to conduct negotiations with rebel forces. Regarding Russia's direct involvement in the Ukraine crisis, Russia sent more than 1,000 of its troops to be deployed in Ukraine and 20,000 others massed along the border. About 15,000 Russian soldiers have been sent across the Ukrainian border since the hostilities erupted, according to AFP news agency. Yet, Russian authorities have denied all charges against them. "Russia has not only stepped up its presence in eastern Ukraine and intervened directly with combat forces - armored vehicles, artillery, and surface-to-air systems - and is actively fighting Ukrainian forces as well as playing a direct supporting role to the separatist proxies and mercenaries," said Jen Psaki, the U.S state department spokesperson in a daily press briefing on 28 August.On the ground, the pro-Russian rebels' offensive has led the Ukrainian forces to withdraw from its positions in the southeast, a new front of fighting opened in southeastern Ukraine. The heavy clashes have been continuing in the strategic port city of Mariupol.

Since the hostilities erupted in eastern Ukraine, at least 2,600 people have been killed during the heavy clashes between rebels and the government forces. Since the "anti- terrorist operation" launched by Kiev, the humanitarian situation has severely deteriorated in eastern cities of the country.
Human Rights Watch (HRW) reported on Sept. 1 that more than 300 civilians in the eastern city of Luhansk have been killed since May. "… the truth is, local residents are subjected to terrifying daily shelling, much of it apparently unlawful, and that the number of civilian casualties is steadily rising," said HRW researcher, underlying the precarious security situation in the country.