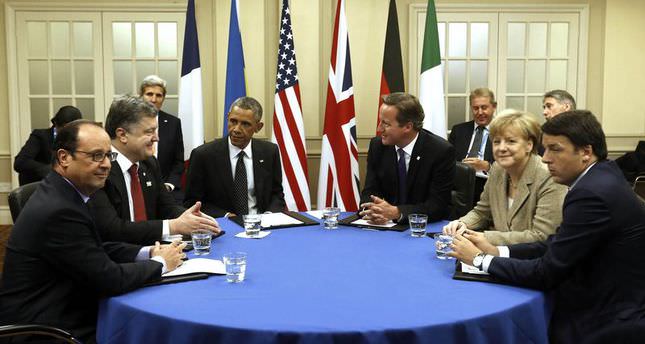 by Sep 04, 2014 12:00 am
Ukraine on Thursday raised hopes of a ceasefire with pro-Moscow rebels during a NATO summit, as Britain and the United States urged the international community to stand up to Russia.

President Petro Poroshenko met with Western leaders at the summit and said he expected a deal would be signed on Friday "for the gradual introduction of the Ukrainian peace plan."

Pro-Russian rebel regions also said they were ready to issue a ceasefire order if the Kremlin-backed peace plan is signed.

Even as Poroshenko spoke in Newport in Britain, however, AFP reporters heard explosions on the outskirts of the flashpoint city of Mariupol, where the Ukrainian army has been digging in against a possible rebel attack.

Russian Foreign Minister Sergei Lavrov also lashed out after British Prime Minister David Cameron and US President Barack Obama argued in an editorial in the Times newspaper that Russia had "ripped up the rulebook" over Ukraine.

He said Washington was "drunk on anti-Russian rhetoric" after repeated accusations from the West that Russia is training and supplying rebels and sending its soldiers into Ukraine.

The summit is expected to create trust funds for Ukraine's military, create new high-readiness units and deploy troops and equipment in former Soviet bloc NATO members unnerved by Russia's involvement in the conflict in Ukraine.

- Britain, US to 'confront' radicals -

Ukraine tops the agenda at the two-day talks, but the 28 NATO leaders must also tackle the menace of ISIS militants in Iraq and Syria and a problematic withdrawal from Afghanistan.

Cameron and Obama said they would not be "cowed" following the beheading of two US journalists by ISIS militants and promised to "confront" the radicals.

NATO Secretary General Anders Fogh Rasmussen also said the alliance would "seriously" examine any request from Iraq for help in its campaign against ISIS, while Cameron said Britain was actively considering arming the Kurds.

"To the east, Russia is attacking Ukraine," Rasmussen said as he arrived for the summit.

"To the southeast we see the rise of a terrorist organisation, the so-called ISIS," Rasmussen said, adding: "We will take important steps to counter these threats."

In a clear effort to seize the initiative and the headlines ahead of the summit, Russian President Vladimir Putin unveiled a peace plan on Wednesday which he said would produce a Ukraine ceasefire on Friday -- the same day the European Union is expected to announce additional economic sanctions against Moscow.

French President Francois Hollande said the sanctions would be approved on Friday "if there has been no progress."

"Everything will depend on the next few hours," he told reporters at the summit.

Speaking before Poroshenko's announcement, Rasmussen was sceptical about the proposal.

"Let me stress we welcome all efforts to find a peaceful solution ... (but) what counts is what is actually happening on the ground," he said.

"We continue to call on Russia to pull back its troops from Ukrainian borders, stop the flow of weapons and fighters into Ukraine, stop the support for armed militants in Ukraine and engage in a constructive political process.

"That would be a genuine effort to facilitate a peaceful solution," he said.

NATO has accused Russia of sending hundreds of troops and tanks into Ukraine in what Rasmussen has warned is the most serious security threat to Europe since the Cold War.

NATO sees Russia's March annexation of Crimea from Ukraine as a violation of the 1997 NATO-Russia Founding Act which fixed Europe's post-Cold War borders and prohibited the use of force to change them.

There is speculation that the landmark treaty could now be revoked, although Rasmussen has insisted that planned NATO deployments in Eastern Europe do not breach its terms -- as Russian actions have done.