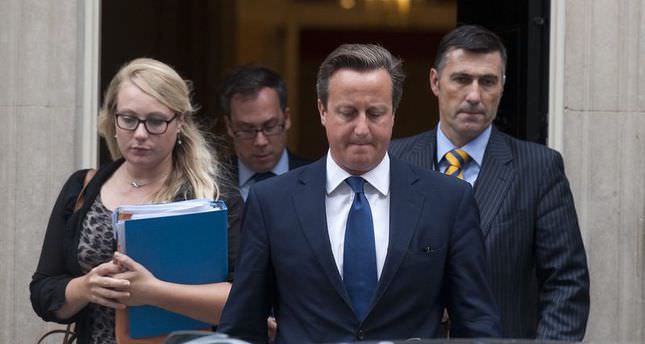 by AA Sep 04, 2014 12:00 am
Britain's prime minister says that although he has tremendous sympathy for those whose relatives are being held by "terrorists," the country will not pay a ransom for those being held by the self-proclaimed Islamic State of Iraq and al-Sham (ISIS) militants.

"I know that this is difficult for families when they are the victims of these terrorists," David Cameron acknowledged to BBC news Thursday, but "we won't pay ransoms to terrorists who kidnap our citizens."

Cameron said that he was convinced that organizations such as ISIS - which has violently taken over swathes of Syria and Iraq and is holding a British hostage under threat of death - have made "tens of millions of dollars from these ransoms."

"They spend that money on arming themselves, on kidnapping more people and on plotting terrorist outrages, including in our own country," he said.

ISIS released a video late Tuesday purported to show the beheading of American journalist Steven Sotloff. A British journalist is pictured at the end of the video, two weeks after Sotloff was shown at the end of another video that appears to show a man with a seemingly British accent beheading fellow American James Foley.

At the end of each video, the seeming executioner says "The life of this... citizen, Obama, depends on your next decision."

Since the first video was released of Foley's apparent death, U.S. forces have continued to carry out airstrikes against advancing ISIS forces in Iraq.

Cameron told the BBC Thursday that he was personally supervising the British hostage's situation.

"We ask whether it's the intelligence agencies, the police, our security services and whoever else, what can we do to help this situation? Is there a way of getting the person home, are there things we can do to support the family?"

He said that since becoming premier, he had authorized a number of hostage rescues in different parts of the world - Britain's foreign secretary admitted Wednesday that a previous rescue attempt for the British journalist had taken place but failed.

Asked whether the U.K. would join in military action against IS, the prime minister did not rule out the possibility.

"We should pursue our national interests," he said. "The most important thing to consider is that we mustn't see this as something where you have a Western intervention over the heads of neighboring states and leaving others to pick up the pieces," Cameron told the BBC.

Any military action would have to be "properly thought through and patiently delivered," he added.

Fighters from ISIS, who already control parts of Syria, captured the northern Iraqi city of Mosul in June and then surged across the north, taking control of a number of predominantly Sunni cities.