US and UK won't be intimated by ISIS: leaders 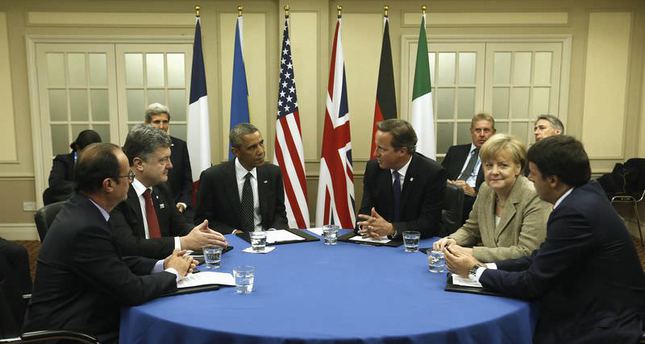 by Associated Press Sep 04, 2014 12:00 am
NATO leaders grappled Thursday with whether the alliance has a role in containing a mounting militant threat in the Middle East, as heads of state converged in Wales for a high-stakes summit also focused on the crisis in Ukraine and next steps in Afghanistan.

President Barack Obama and British Prime Minister David Cameron declared that their nations would "not be cowed" by extremists from the self-proclaimed Islamic State of Iraq and al-Sham (ISIS) who have claimed responsibility for killing two American journalists. They also challenged NATO to not turn inward in the face of the threat.

"Those who want to adopt an isolationist approach misunderstand the nature of security in the 21st century," Obama and Cameron wrote in a joint editorial in the Times of London. "Developments in other parts of the world, particularly in Iraq and Syria, threaten our security at home."

Obama, Cameron and dozens of other NATO leaders met on a golf resort in Wales for the two-day summit. Leaders here also planned to commit to a more robust rapid response force on its eastern flank, which would aim to serve as a deterrent to Russian aggression.

Yet much of the action was to take place on the sidelines of the summit, where the American and British leaders were expected to drum up support for an international response to confronting ISIS militants in Iraq and Syria.

Arriving at the summit site on Thursday, NATO Secretary-General Anders Fogh Rasmussen said he believes the broader international community "has an obligation to stop the Islamic State from advancing further," but noted that the alliance hasn't received any request for help.

"I'm sure that if the Iraqi government were to forward a request for NATO assistance, that would be considered seriously by NATO allies," Rasmussen said.

The militants have claimed responsibility for murdering two American journalists, releasing gruesome videos of their beheadings. Both the U.S. and Britain are deeply concerned about the potential threat to their homelands that could come from the foreign fighters who have joined the violent ISIS group.

Cameron on Monday proposed new laws that would give police the power to seize the passports of Britons suspected of having traveled abroad to fight with terrorist groups.

The U.S. began launching airstrikes against ISIS targets in Iraq last month, and both the U.S. and Britain have been making humanitarian aid drops to besieged minority groups there. Cameron said that he hadn't ruled out joining the U.S. in airstrikes, but added that the priority was to support those already fighting the militants on the ground.

"We need to show real resolve and determination, we need to use every power and everything in our armory with our allies with those on the ground to make sure we do everything we can to squeeze this dreadful organization out of existence," Cameron told the British network ITV.

Also facing Obama is a decision about whether to expand U.S. military action against the extremists to Syria. While Obama has said he's considering that step, he has suggested in recent days that it's not imminent.

U.S. officials say Obama is reluctant to delve into Syria's quagmire on his own. He's expected to use some of his discussions in Wales to try to build a coalition that could join him in confronting the Islamic State through a combination of military might, diplomatic pressure and economic penalties.

Obama and Cameron visited a local school Thursday morning, where they greeted students learning about NATO before sitting down for a private meeting. Later, the two met with their counterparts from France, Germany and Italy to discuss the crisis in Ukraine. In a show of Western solidarity, new Ukrainian President Petro Poroshenko also joined the discussion.

Ukraine and Russia have been locked in a standoff for months, with pro-Moscow forces stirring instability in eastern Ukrainian cities. On the eve of the NATO summit, Russia and Ukraine said they were working on a deal to halt the fighting, but Western leaders expressed skepticism noting it wasn't the first attempt to end the deadly conflict.

A centerpiece of the NATO summit was to be the announcement of the rapid response force. Officials said the alliance could position at least 4,000 forces and military equipment in the Baltics and elsewhere in Eastern Europe.

"We must use our military to ensure a persistent presence in Eastern Europe, making clear to Russia that we will always uphold our Article 5 commitments to collective self-defense," Obama and Cameron wrote.

Under Article 5 of the NATO charter, an attack on one member state is viewed on an attack on the whole alliance. Obama reiterated his support for that principle Wednesday during a visit to Estonia, one of the newer NATO members set on edge by Russia's provocations.