As violence continues, evidence of war crimes in Ukraine revealed 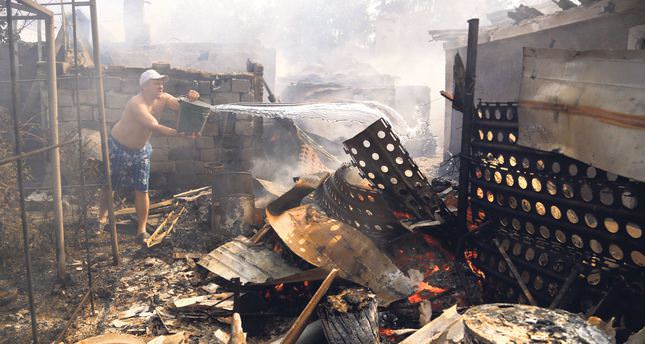 by Begüm Tunakan Sep 07, 2014 12:00 am
A day after Russian backed separatist rebels signed a ceasefire to put an end to the five-month conflict, the shelling resumed in the east of the country, threatening civilians residing in the country's war-torn east. The humanitarian situation in the east has also gradually deteriorated. Regarding the fragile situation on the ground, Amnesty International, a nongovernmental organization protecting human rights, has called on all parties to halt "violations of the laws of war."

"All sides in this conflict have shown disregard for civilian lives and are blatantly violating their international obligations," said Salil Shetty, Amnesty International's Secretary General, while holding Ukrainian militia groups and Russia-backed separatist forces responsible for war crimes in the east of the country. Based on the Amnesty International researcher's report on the situation in eastern Ukraine, the "incidents of indiscriminate shelling, abductions, torture, and killings" were reported, revealing human rights violations committed by both sides.

Regarding all allegations of serious violations of international humanitarian law, Amnesty International called on the Kiev government to conduct an effective investigation in order to "bring to justice individuals [like commanders and civilian leaders] responsible for war crimes" and punish those who have been responsible for serious violations. "Civilians in Ukraine deserve protection and justice," Salil Shetty said. "Without a thorough and independent investigation, there's a real risk Ukrainians will harbor the scars of this war for generations," he added.

Human Rights Watch (HRW) revealed another war crime committed by the Russianbacked separatists who have "detained civilians on allegations of violating public order and then subjecting them to forced labor." "Rebels in eastern Ukraine need to stop forcing people into labor brigades and stop exposing them to dangers of the front lines," said Hugh Williamson, Europe and Central Asia director at HRW, indicating the severity of the situation in eastern Ukraine by calling it "violations of the laws of war."

Considering the mounting tension in the eastern Ukraine, Amnesty's report accused Russia of fueling separatists' crimes, revealing satellite images that proves Russian invasion into eastern Ukraine - a charge that Russia repeatedly denies. Based on the compelling evidence of a build-up of Russian armor and artillery in eastern Ukraine, the organization has considered the crisis as "an international armed conflict," due to Russian intervention.

The Amnesty report states that "new [Russian] artillery positions [were] established just inside the Ukrainian border between Aug. 13 and 29, including what appear to be 122-mm Howitzer D-30 artillery units in firing positions pointed toward the west.Two of the positions have a support vehicle and what looks like bunkers. On Aug. 29, six armored amphibious vehicles, likely BRDM-
2s, can be seen."

Despite truce talks, the violent atmosphere in the east has not changed as the clashes between Russian-backed separatists and the Kiev-backed para-military groups have reportedly continued as of Saturday night in the crucial port city of Mariupol and the rebel-held city of Donetsk. The Donetsk airport that has been under the control of Ukrainian government troops has now been under rebel attack.

Representatives of Ukraine, the pro-Russian separatist leadership, Russia and the OSCE security watchdog began peace talks on Friday on resolving the Ukraine conflict.Following the talks aimed at negotiating the Ukrainian cease-fire started in Minsk, Belarus, a preliminary truce deal with rebels has been agreed, signaling a significant breakthrough in the five-month conflict in eastern Ukraine. Yet, the renewed shelling has led to the truce nearing collapse.

Since the five-month conflict erupted in eastern Ukraine, the growing hostilities have turned the east of the country into a battle zone where the conflict has come at the cost of an increasingly high death toll. At least 2,600 civilians have been killed during the heavy fighting. Following the establishment of the pro-Russian rebels, self-proclaimed Donetsk People's Republic in April, the instability has prevailed in the eastern cities leading to the worsening of humanitarian conditions for the civilians. Many Ukrainians have also been forced to flee the war to other parts of the country.