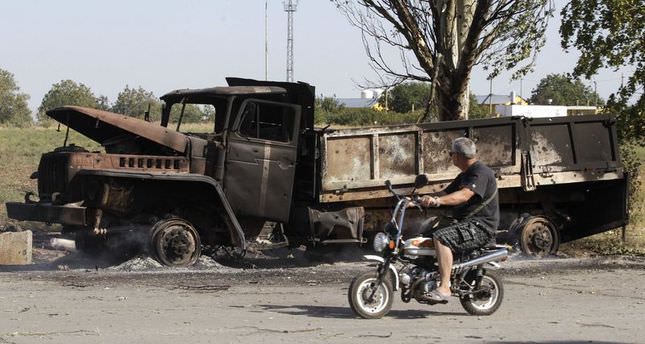 The ceasefire, brokered by envoys from Ukraine, the separatist leadership, Russia and Europe's OSCE security watchdog on Friday in Minsk, is part of a peace plan intended to end a five-month conflict that has killed nearly 3,000 people.

The renewed shelling broke out hours after Russia's President Vladimir Putin and his Ukrainian counterpart Petro Poroshenko had agreed in a telephone call the truce was holding and had discussed ways of getting in humanitarian aid.

Both sides blamed the other for the violations to ceasefire. There was no immediate word on casualties.

A Reuters witness heard prolonged shelling in an area north of Donetsk and saw plumes of black smoke filling the sky on Sunday morning.

The shelling came from near the airport, which has been in the hands of Ukrainian government forces though pro-Russian rebels control the city. Rebels told Reuters the airport itself was now empty and the fighting was centred on a nearby military compound.

"Listen to the sound of the ceasefire," joked one armed rebel. "There's a proper battle going on there."

Overnight the port of Mariupol on the Sea of Azov, to the south of Donetsk, also saw a serious violation of the ceasefire when government forces came under artillery fire.

In the days before the ceasefire, government forces had been trying to repel a major rebel offensive targeting Mariupol, a key port for Ukraine's steel exports. Kiev says the rebels were backed by Russian troops, a charge Moscow has denied.

"They, terrorists, Russians, are trying to scare us. They have no respect for the ceasefire. They are lying all the time. They are people with no honour," said Slavik, a Ukrainian soldier armed with a machinegun.

"We left this area the day before yesterday. Everyone saw us pulling out tanks in line with the agreement. We only left lightly armed people to man checkpoints and these monsters violated every word of the agreement," he said.

A separatist leader, Andrei Purgin, told Russia's RIA news agency: "Despite the provocations of Ukrainian forces, the militia of the people's republics (self-proclaimed "states" in Donetsk and nearby Luhansk that do not recognise Kiev's authority) will keep firmly to the Minsk agreements. The militias are not resorting and will not resort to arms."

The peace roadmap agreed on Friday also includes an exchange of prisoners of war and establishing a humanitarian corridor for refugees and aid.

Interfax news agency reported that the first POWs were handed over to government forces late on Saturday but this report could not be confirmed immediately.

Poroshenko agreed to the ceasefire after Ukraine accused Russia of sending troops and arms onto its territory in support of the separatists, who had suffered big losses over the summer. Moscow denies sending troops or arming the rebels.

Poroshenko spent Thursday and Friday at a NATO summit in Wales at which U.S. President Barack Obama and other leaders urged Putin to pull its forces out of Ukraine. NATO also approved wide-ranging plans to boost its defences in eastern Europe in response to the Ukraine crisis.

The Ukraine conflict has revived talk of a new Cold War as the West accuses Putin of deliberately destabilising the former Soviet republic. Putin says he is defending the interests of ethnic Russians facing discrimination and oppression.