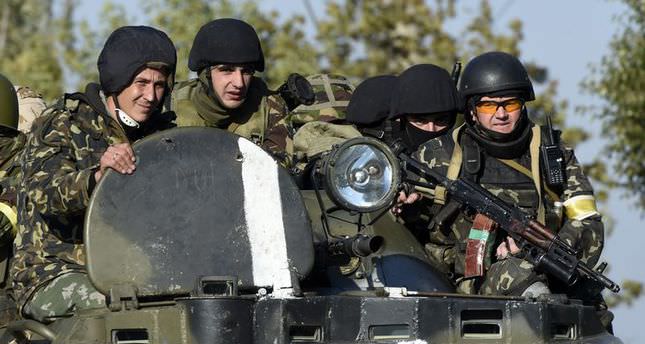 The cease-fire agreement between Ukrainian government forces and pro-Russian separatists was thrown into peril as peace talks in Minsk were held on volatile ground. The peace plan has seemingly not been able to put an end to the five-month-long conflict in the east of the country. Tensions between the West and Russia over the crisis in Ukraine continue as EU leaders prepared to adopt more Russia sanctions after the NATO summit.

Despite warning from Moscow, the new sanctions package targeting Russian individuals and firms were taken into effect today, as it "is due to be formally adopted by member states through a written procedure […] so the procedure is ongoing," said a European Commission spokeswoman.
As a warning of retaliation, the Russian government is considering closing its airspace to Western aircraft, Russian Prime Minister Dmitry Medvedev said Monday, speaking to a local Russian newspaper. "We believe we have friendly relations with our partners and foreign airlines of friendly countries are permitted to fly over Russia," Medvedev said. "However, we will have to respond to any restrictions imposed on us. If Western carriers have to bypass our airspace, this could drive many struggling airlines into bankruptcy."

So far, EU sanctions against Russia have been considered "relatively mild." The EU has long considered adopting Tier 3 sanctions – hard-hitting sanctions to hit the Russian gas and oil sectors and impose an arms embargo on Russia. As the existing Tier 2 sanctions have imposed travel bans and asset freezes on specific Russian businesses, individuals and organizations in Russian President Vladimir Putin's inner circle in response to the annexation of Crimea and the crisis in eastern Ukraine, European leaders aim to block Russian access to European markets for whole sectors through Tier 3 sanctions. Some big Russian enterprises' owners close to Putin such as Novatek, Gazprombank and many others have already been targeted.

As cease-fire talk negotiations were held on the volatile ground, whether the truce will hold is of crucial importance. The Organization for Security and Cooperation in Europe (OSCE) stressed Monday the need to strengthen its monitoring where the conflict has prevailed while urging for a dialogue between the parties as a more effective way of addressing the crisis. "Overall the cease-fire held even though it is still shaky," Swiss ambassador Thomas Greminger, the current chair of the OSCE said, Reuter's news agency reported.

Meanwhile, after the shelling of Mariupol and fighting near the airport in Donetsk over the weekend, no casualties were reported on Monday, the regional administration of the self-styled Donetsk People's Republic announced. After a day of clashes in the east of the country, the cease-fire between pro-Russian rebels and Ukrainian government troops has been reportedly held for the first day of the week. However, nobody can presume what will happen in the upcoming days. The renewed shelling could lead to the truce collapsing unless the violence ends. Ukrainian President Petro Poroshenko visited Kiev government troops on Monday deployed in the crucial port city of Mariupol where heavy clashes resumed over the weekend.

During the heavy clashes in the five-month conflict, the overall death toll hit more than 3,000, the U.N.'s human rights envoy said on Monday. As the humanitarian situation deteriorates in the war-torn east, many civilians have been displaced due to violence, security concerns and miserable living conditions.