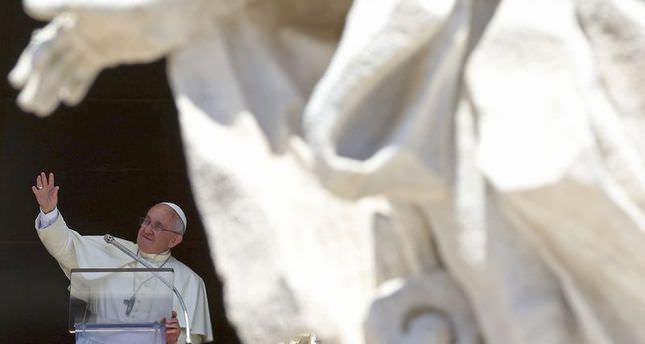 by AA Sep 09, 2014 12:00 am
Pope Francis has confirmed during a private audience with the Turkish Ambassador to the Holy See, Kenan Gürsoy, that he hopes to travel to Turkey in the near future.

The 77-year-old pontiff's comments came on Monday as Gürsoy visited him to bid farewell, as the ambassador is due to leave Rome following the end of his assignment.

Francis is expected to visit the Turkish capital of Ankara on November 29 and then Istanbul, in order to celebrate the feast of Saint Andrew the following day, according to media reports.

He is expected to use the visit to call for an end to the killing of Middle Eastern Christians in Iraq and Syria.

Diplomatic sources said the pope told the Turkish envoy he was looking forward to visiting Turkey, after which he is also expected to visit Armenia.

Francis was originally invited to Turkey earlier this summer by Bartholomew, the Orthodox Patriarch, who had recently travelled to the Vatican from Turkey to take part in prayers for peace between the Argentinian pope and Israeli and Palestinian leaders, according to Rome's La Repubblica newspaper and diplomatic sources.

The visit is expected to be announced officially once newly-installed Turkish President Recep Tayyip Erdoğan issues a formal invitation to the Roman Catholic leader to come to Turkey.