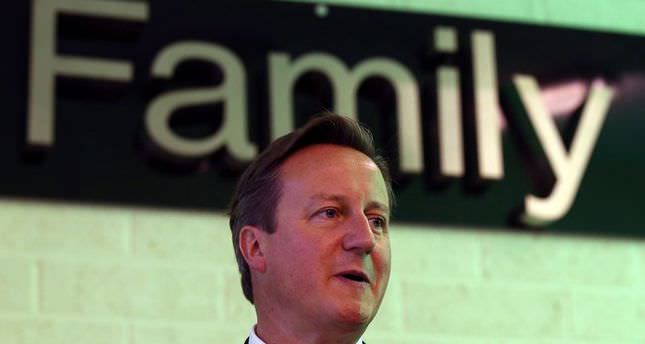 by Daily Sabah with Agencies Sep 10, 2014 12:00 am
British PM David Cameron said on Tuesday that he would be heartbroken if the Scots decided to breakaway from the United Kingdom, which Cameron described as a "family of nations".

Many commented on Cameron's words as he "begged" the Scottish people to keep the union, both to preserve economic and diplomatic status of the United Kingdom and his seat in 2015 elections, as Cameron leads the Conservative and Unionist party, and even though the latter is used seldomly, many British voters would likely blame Cameron and his government for a negative result.

But acknowledging that Scottish independence has a very high chance, Cameron repeated his government's tendency not to share his country's strong and widespread currency, the pound, with the independent Scotland.

United Kingdom's status as a world power is another bargaining chip on the table for the unionist campaign. The UK's membership to European Union and its permanent seat in the UN Security Council are the most important topics on agenda as they involve other nations in terms of consent. The former EU Commission President Jose Manuel Barroso earlier stated that it would be difficult to include an independent Scotland to the union, at least right after the breakaway.

As there are ongoing criticism about the efficiency and fairness of Security Council, the UK may also lose its permanent seat in the Council if the Yes campaign prevails.

The Scots are expected to vote on September 18. The latest pole conducted announced on Sunday that the pro-independence campaign has taken the lead for the first time, the reason why the British government as well as the opposition are trying very hard to persuade the Scots to remain in the union.

Labour's Ed Miliband and Liberals' Nick Clegg joined British PM Cameron for a visit to Scotland to support the unionist campaign, a move welcomed and mocked by Scottish PM Alex Salmond, leader of Scottish National Party that won the regional elections in 2011 and the Yes campaign.

Obscurity arising from the future of Scotland is one of the most important determining factors on current trends of European markets. The sterling hit a record low of 10 months for the last two days. Many Scotland based companies saw losses in their assets, while multinational companies expressed their tendency to keep the union.

Scotland's biggest banks, Royal Bank of Scotland (RBS), Bank of Scotland (BS) owned by Lloyds Banking Group that also owns mortgage giant Halifax and Cyldesdale Bank announced on Thursday that they will move to England in case of a breakaway. RBS and BS were bailed out by the British Government during 2008 financial crisis. All three banks also have the right to issue the sterling, which they would lose in case they continue to operate from an independent Scotland.

UK's largest retirement and insurance company, Edinburgh based Standard Life, also announced that they will move their headquarters to England if Yes would be the result of the referendum.