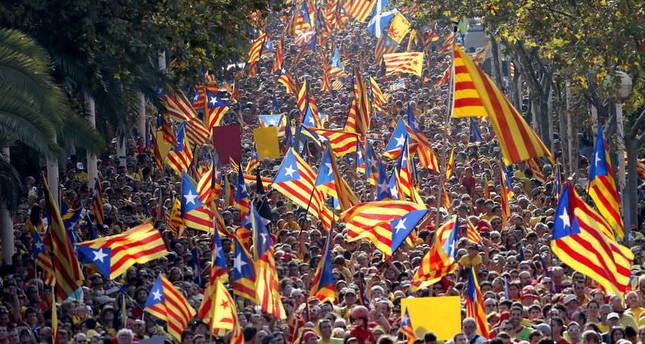 Sepatatist voices have grown stronger across Europe as the impending Scottish referendum boosts Catalonia's own independence campaign demanding a vote on secession.

Catalonia's independence campaign to break away from Spain has gained significant ground as hundreds of thousands of Catalans took to the streets of Barcelona on Thursday to demand the right to vote on a split from Spain. Their hopes for independence were fuelled immediately after Scotland's pro-independence camp narrowed the gap in the polls,raising hopes of seceding from the United Kingdom.

Around half a million Catalans gathered to celebrate the National Day of Catalonia, a day-long festival to commemorate the defeat of Catalonia during the War of the Spanish Succession. This time, the festival took the form of massive pro-independence demonstrations against the Madrid government refusing to discuss Catalonia's full independence from Spain.

"We want to decide our future. We don't understand why that is constantly denied. We look up to Scotland," said Victor Panyella, a 50-year-old professor told Reuters. "They are so lucky to belong to a country that allows that kind of vote. That is a big difference between the two of us, but we are linked by the excitement of deciding our future," she added.

Despite Madrid's refusal, Spain's wealthy Catalonia region has set the date for holding a referendum on independence for Nov. 9. The Spanish parliament in April 2014 voted to reject a request by Catalan authorities'demand for greater autonomy. After a long debate, all major parties voted against the referendum. A total of 299 Spanish MPs voted against the motion, with 47 votes in favor. The Spanish Prime Minister Mariano Rajoy called the referendum "illegal" while stating that the Madrid government would not give permission to Catalonia for holding a referendum. The referendum would be unconstitutional due to the fact that Spain's constitution only allows referendums that includes all Spaniards.

Regarding the dispute between Spain and Catalonia, the president of the Catalan government Artur Mas has called on Spanish authorities to authorize the self-determination vote. "It is surprising, because the Catalan issue is one of the biggest issues the Spanish government is facing," Mas said, as AP news agency reported. "It is an error to try and solve this through legal means. Political problems are solved through politics,not with legal threats."

The region of 7.6 million has long been enjoying prosperity and well-being in Spain's northeast with its own language and culture, compared to the Madrid government which is suffering from economic challenges including high unemployment rates and low average income. The economic crisis that hit Spain in 2008 has caused increasing tensions between the two parties, leading to a greater surge in support for separation. The Catalan government blamed the central government for much of Spain's debt crisis. Even though Catalonia lacks natural resources, it is Spain's richest and most highly industrialized region which makes the average income higher than the state-wide average with 27,300 euros (TL 77,575) a year. Just like Catalonia, Scotland is also enjoying higher rates of income with 32,700 euros a year. The North Sea oil and gas remain the central point of debate over the referendum and are determining factor for the future of an independent Scotland. The Scots are preparing to cast their votes on Sept. 18 in a historical referendum that may end the 300 year old union with the United Kingdom. As Catalans give massive support to the Scottish referendum, a sense of urgency in the unionist camp in the U.K. created panic among the British party leaders as they are moved in favor of defending the "family of nations" in Scotland.

Amid growing demands for independence, about 2 million people had marched in Barcelona on National Day in 2012, which led to grassroots pressure that forced the Catalan nationalists to break away from the centralized Spanish state.