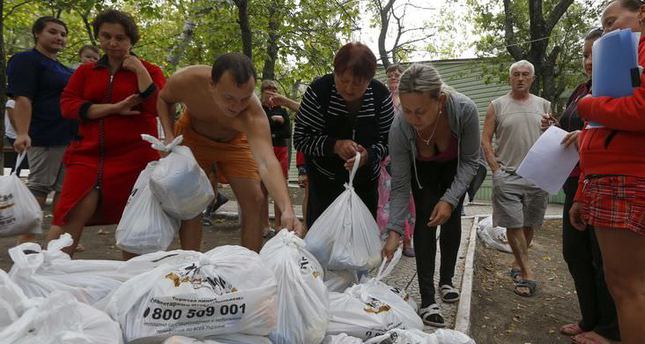 by AA Sep 12, 2014 12:00 am
The United Nations has launched an emergency operation in eastern Ukraine to deliver food to civilians caught in five months of fighting.

The UN's World Food Program announced on Friday that is was to initiate its first aid mission in the stricken provinces of Donetsk and Luhansk, as a cease-fire between government forces and separatists entered its second week.

The program said it was focusing on "vulnerable people affected by the conflict, distributing food in transit centers and public shelters in Donetsk and Luhansk."

The organization has distributed 10,000 daily rations, enough to feed 2,000 people for five days, a statement said.

"WFP plans to scale up its operations to a total of 90,000 daily rations, which would feed more than 18,000 people for five days, before the end of the month," the organization added.

The program estimates that up to 10,000 displaced people will receive its food packages by mid-October and aims to feed up to 120,000 people over the next six months at a cost of $15 million.

More than 310,000 Ukrainians are internally displaced, according to the UN. The WFP warned the total may be double that figure.