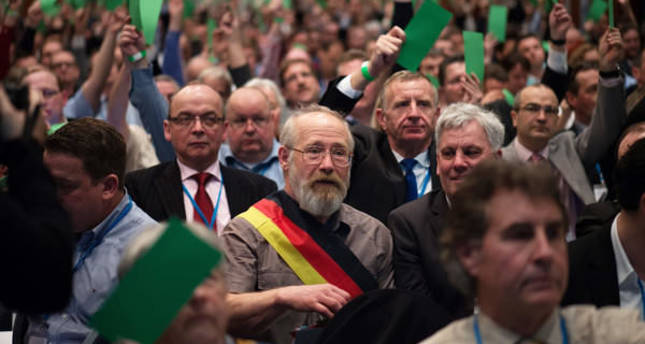 by Daily Sabah Sep 16, 2014 12:00 am
Eurosceptic party Alternative for Germany (AfD) won more than 10 percent of the votes in two German state elections last Sunday. The results come two weeks after the AfD entered parliament in the eastern state of Saxony with almost 10 percent support of the vote.

Although Merkel's Christian Democrats (CDU) came first in Thuringia and increased their share of the vote in Brandenburg, the popularity of the AfD poses a threat to the main parties. The Social Democrats (SPD) were elected first in Brandenburg, where they have been in power since Germany's reunification.

However the SDP lost votes compared to state elections five years ago, the data showed. The AfD seized a higher than expected amount of the vote in the elections of the two eastern states, with 10.6 percent of the vote in Thuringia and 12.2 percent in Brandenburg.

According to last week's polls, the eurosceptic party, which opposes euro bailouts to cash-strapped eurozone states and promotes a return to the Deutschmark currency, was expected to score up to around 7 to 9 percent in both states. The AfD national leader, Bernd Lucke said his group has spoken up on issues that establishment parties have kept silent on. "We are the force that's renewing the political landscape. No one can deny it anymore: the citizens are thirsting for political change" said Lucke.