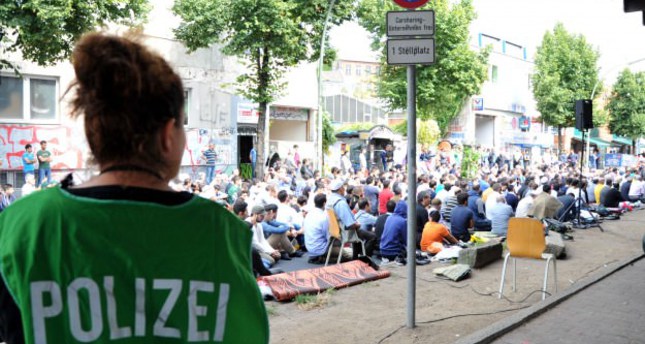 by AA Sep 16, 2014 12:00 am
Muslim organizations in Germany are to hold a nationwide campaign on Friday against religious extremism and to draw attention to growing racism and attacks against mosques.

Dr. Zekeriya Altuğ, head of the northern branch of DITIB, the largest Turkish-Muslim union in Germany, said at a press conference in Berlin on Tuesday: "Many terror groups are using the Islamic symbols, values and terminologies for their goals.

"We Muslims do not want to be indifferent to abuse of our values and terminologies."

"We would like to give a clear message on Friday - will try to demonstrate what Islam in reality stands for," he added.

During the Friday prayer this week, imams from 2,000 mosques throughout Germany will deliver messages on the real values of Islam in their khutbahs, Dr. Altug said.

He also added that non-Muslims were also to be welcome to mosques to show solidarity with them.

The highlight of the nationwide campaign; "Muslims Standing Against Hate and Injustice" on September 19, will be peace rallies in front of mosques in nine big cities, including Berlin, Frankfurt, Hamburg, Munich and Hannover.

Recent developments in the Middle East and attacks and violent killings by the Islamic State of Iraq and al-Sham (ISIS) have sparked suspicion and negative feelings towards Muslims in Germany.

The participation of some radicalized young Muslims from Germany to ISIS has further added to worries.

According to a survey by the Forsa Institute last month, 52 percent of Germans do not see Islam as part of Germany, despite the fact four million Muslims have lived in the country for decades.

Ali Kızılkaya, the spokesperson for Germany's Muslim Coordination Council (KRM), told journalists on Tuesday that the radicalization among some of the younger generation of Muslims should be a common concern for all in Germany.

Kızılkaya said: "This problem is affecting all of us. These radicalized people have socialized in this country. They have taken lots of things from this society.

"They had frustrations, maybe fear of the future. This problem is related to sociological questions rather than religious questions."

German security organizations estimate that about 400 Germans, mostly young immigrants, have travelled to Syria and joined ISIS since the beginning of the civil war in Syria.

About 120 later returned to Germany.

Kızılkaya called on German public opinion to work together with Muslim organization to prevent young Muslims being radicalized.

He said: "It should not be the duty of only Muslim communities to tackle this problem.

"These young people are our children. Each lost young men is the loss of our society."

"We have planned this major campaign for Friday to stand united against hatred and injustice together with the German community."

The recent attacks against mosques in Germany have sparked fears among the Muslim community.

Eighty mosques were attacked in the last two years, according to Germany's Muslim Coordination Council (KRM).