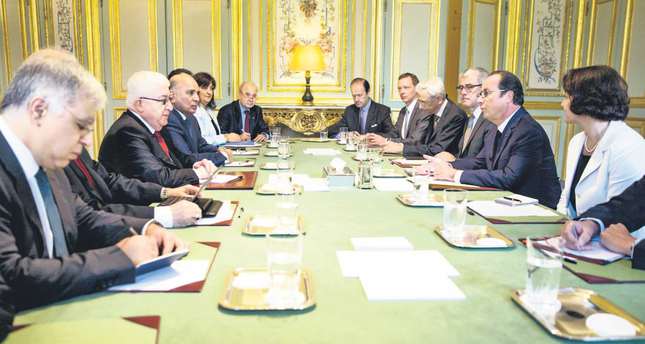 France hosted Iraqi president and called on the international community to unite against ISIS while several Arab countries offered to conduct airstrikes in cooperation as U.S. seeks to broaden coalition

French President Francois Hollande called on Monday for united international action to tackle the threat from Islamic State of Iraq and al-Sham (ISIS) militants as he opened a conference on Iraq bringing together members of a U.S.-led coalition. The United States this week unveiled an outline plan to fight the ISIS militants simultaneously in Iraq and Syria. It believes it can forge a solid alliance despite hesitancy among some partners and questions over the legality of action, notably in Syria where the militant group has a power base.

"What is the threat?" the French leader said as he opened the oneday meeting of officials from some 30 states in Paris. "It is global so the response must be global ... Iraq's fight against the terrorists is also our fight. We must commit ourselves together - that is the purpose of this conference," said Hollande, who last week travelled to Baghdad to meet members of Iraq's new government. Iraqi President Fuad Masum said he hoped the Paris meeting would bring a "quick response" to militants who have declared a caliphate or Islamic state ruled under Sharia law in the heart of the Middle East. "ISIS's doctrine is either you support us or kill us. It has committed massacres and genocidal crimes and ethnic purification," he told delegates.

Foreign ministers from the main European states, the five permanent members of the U.N. Security Council, Iraq's neighbors and Gulf Arab states Qatar, Saudi Arabia, Kuwait and the UAE, gathered to discuss political, security and humanitarian aspects of tackling ISIS. Iran, which is highly influential in its neighbor Iraq, is not attending the conference. "We wanted a consensus among countries over Iran's attendance, but in the end it was more important to have certain Arab states than Iran," a French diplomat said, signaling that Saudi Arabia had not been keen on Tehran coming.

French officials say the coalition plan must go beyond military and humanitarian action, arguing there must also be a political plan for once ISIS has been weakened in Iraq.

France has said it is ready to join U.S. air strikes in Iraq but says legal and military limitations make it more difficult in Syria, where ISIS's main
powerbase lies. Earlier, Foreign Minister Laurent Fabius said French aircraft would begin reconnaissance flights over Iraq on Monday. "We told the Iraqis we were available and asked them for authorization (to fly over Iraq)," Fabius told France Inter radio, confirming that the first flights from a French base in Abu Dhabi would begin on Monday. "The cost of inaction would be to say to these butchers 'go ahead, you have a free pass'. We won't accept that," he said. A French official confirmed two Rafale fighter jets and a refueling aircraft had taken off on Monday for Iraq.

The idea of a coalition has been accepted in Western capitals and 10 Arab states, including regional rivals Saudi Arabia and Qatar. But U.S. Secretary of State John Kerry said on Friday it was too early to say what tasks individual partners would take.

While France was offering to consolidate the coalition against ISIS, several Arab countries made an offer to conduct airstrikes against ISIS targets. A U.S. official told news agencies that they were under consideration as the US begins to identify roles in its coalition against fighters who control parts of Iraq and Syria. "I don't want to leave you with the impression that these Arab members haven't offered to do air strikes because several of them have," a senior US State Department official said in Paris. On Thursday US Secretary of State John Kerry won backing for a "coordinated military campaign" from 10 Arab countries including, Egypt, Iraq, Jordan, Lebanon, and six Gulf States including Saudi Arabia and Qatar. So far, France has been the only country to publicly offer to join US air attacks on Islamic State targets, although it has said its involvement would be limited to Iraq.
The UK Prime Minister David Cameron also commented on ISIS as a British aid worker was beheaded by the ISIS militants on Saturday and the group threats the UK to kill another British citizen. Cameron said "We must recognize that it will take time to eradicate a threat like this. It will require... action at home and abroad. We will hunt down those responsible and bring them to justice no matter how long it takes. They boast of their brutality." Touching on the fact that ISIS justifies its activities through claiming they are serving Islam, Cameron said "They claim to do this in the name of Islam. That is nonsense.

Islam is a religion of peace. They are not Muslims, they are monsters." Cameron on Sunday declared that they will be a part of the U.S. coalition but will not participating militarily. "First, we will work with the Iraqi government to ensure it represents its entire people and is able to tackle this threat effectively," he said. We will help them protect their own people and the minorities, including Christians that they have helped already, through our supplies of ammunition and of training."

Cameron said the second point of action would be to work at the United Nations to mobilize the broadest possible support to bear down on ISIL, and the third would be to support the United States in taking direct military action. "We support that. British Tornadoes and surveillance aircraft have been helping with intelligence gathering and logistics," he added. He underlined, however, that the mission was not about putting British combat troops on the ground, rather about "working with others to extinguish this terrorist threat.
Last Update: Sep 16, 2014 4:02 pm
RELATED TOPICS