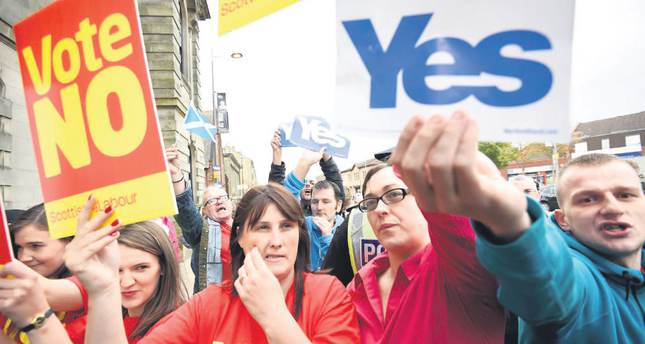 As Scotland votes on independence today, the undecided voters could be the deciding factor in whether to break up or continue the 300-year-old union. Latest polls indicate that the number of yes and no voters is very close

Getting the correct number of undecided voters is as confusing as the Scotland referendum poll predictions themselves, some putting them at 23 percent, others placing them at just 8. But one certainty is that their decision is Scotland's future - the "Undecided" hold the result of Thursday's referendum in their hands. It is entirely possible, says Peter Kellner, president of internetbased market research company YouGov that many of them know perfectly well how they will vote, but do not want to tell pollsters. His warning stems from what political theorists call "social satisficing" - a phenomenon where voters are reluctant to express their political opinions to complete strangers.

One such voter could, for example, be a solitary unionist who lives in a neighborhood of independence supporters and does not want to air his view in public. Another could be somebody who talks up the romance of an independent Scotland but, when it comes to the crunch, lets his wallet rule his head.

Kellner's company electrified the referendum campaign at the beginning of September when it released a poll that gave those saying "Yes" to Scotland leaving the U.K., its first ever lead: 51 percent, against the "No" campaign on 49 percent. But he admitted he had not expected it. "I must own up to my fallibility. I did not predict the 'Yes' surge," he wrote on YouGov's website. "It caught me, like others, by surprise." "So might the events of the final few days," he warned.

A poll of polls has the two sides running neck-and-neck, but independently they present a confused picture - one this week gave the separatist campaign a lead of 54 percent, while another put the unionists ahead by the same margin. But many Scottish people, pollsters have agreed, have not yet made up their minds, but they are varying wildly on the numbers. One company, TNS, said last weekend that nearly a quarter of voters - 23 percent - were undecided, while an Opinium survey conducted around the same time put them at just eight. But in an election as tight as the referendum, a small number of undeclared voters such as this could tip the result. Sam Bowman, an economist from the Londonbased Adam Smith Institute, told the Anadolu Agency on Tuesday that when it boils down to it, it's all about the money. "If you don't really have a reason for Scotland to be independent, then I assume that the risk adverse scenario would be most likely to say 'no,' you would not take the chance of losing your money, or job," he said. "Economic considerations would weigh against the independence," he added.

Recent British elections have been fairly straightforward to predict - ahead of the last parliamentary election in 2010, pollsters correctly said no party would form a parliamentary majority, but that the Conservatives would be the largest. But this week's referendum has evoked memories of an earlier Westminster vote in 1992, when surveys consistently indicated John Major's Conservatives were neck-and-neck with the Labour Party.
The eventual outcome was a 7.5 percentage point margin over Labour, a strong victory for Major. Pollsters described this as the "Shy Tory factor," where voters were reluctant to openly admit supporting a party that had been dominated for more than a decade by the divisive Margaret Thatcher.

When it comes to the Scottish vote, many of those still to announce their intentions may be closet unionists, but - in a Labour stronghold - terrified to publicly nail their colors to a mast, that could be determined as pro-David Cameron. The prime minister and his party are deeply unpopular in Scotland, many seeing their "public school elitism" as synonymous with a centralized grasp on power that they say has seen not just Scotland, but also parts of England, marginalized by both Conservative and Labour governments for the past 20-odd years. The Conservative party has just 43 parliamentary seats of the 158 that make up the three northern English regions - 86 percent are elsewhere in the country. However, compare the three southern regions outside London - which is under Labour control - and the Conservatives have 197 seats compared to Labour's 10.

The figures were replicated in the 2010 election - through which the Conservatives gained power by forming a coalition with the Liberal party; Cameron and Co. winning 47 percent of the vote in the south and just 31 percent in the north. Labour, meanwhile, took 17 percent in the south and 38 in the north. The prime minister last week even recognized this animosity, pleading with the Scots not to vote "Yes" just to "give the effing Tories a kick." Not all undecided voters are keeping their intentions secret, however.

Some are genuinely divided between the feeling that Scotland deserves to determine its own destiny, as "Yes" Scotland has argued, and the unionist "Better Together" campaign's warnings that independence could make the country a more expensive place to live. In the final days, "Yes Scotland" has attempted to court the many left-of-center Scots who voted for Labour or the Scottish National Party at the last Scottish election in 2011, but are not persuaded on the independence issue.

It says a "Yes" vote is "not a vote for the current government or its policies." It is an irony of this campaign that "Better Together" used the same line to dissuade voters from a "Yes" vote. The referendum should not be used to send a message to the London government unpopular with most Scots, it says. Other eligible voters are simply not interested. Last month police even arrested a 28-year-old man after he attempted to sell his vote on the auction site eBay, saying he did not care about the outcome. Elsewhere, teenagers were also seen yawning and swapping exasperated messages on Twitter during a televised BBC debate for Scottish 16- and 17-year-olds, who are voting in a British election for the first time. For its final survey this Wednesday night, Kellner said YouGov will speak to "much larger" numbers of people than it normally does in an attempt to get its final prediction right.
Last Update: Sep 18, 2014 10:40 am
RELATED TOPICS