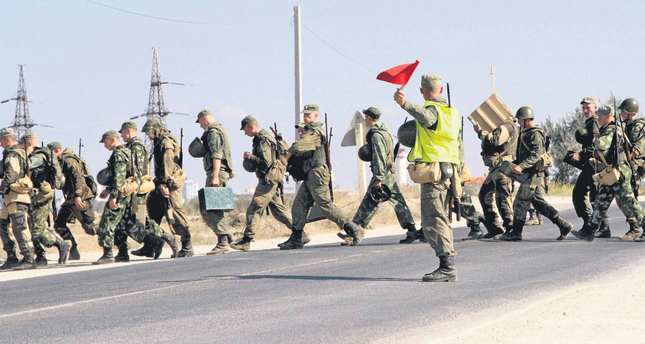 After Russian annexation, the Crimean Tatars have become the victims of political repression and humiliation. Russian aggression has led to violations of human rights against Crimean Tatars, according to a report, released by U.N. a few weeks ago. On September 16, Russian security forces raided the selfgoverning body of the Crimean Tatars, the Mejlis in Crimea's capital, Simferopol and their charitable organization "Crimea
Fund." The police broke into the building and conducted a search for 12 hours to find banned Crimean Tatar literature.

"In this case, special forces [FSB, Federal Security Service] were doing their job, according to the instructions. There were signals about banned literature and other materials," the acting head of Crimea Sergey Aksyonov said to ITAR- TASS Russian news agency. The Parliament of the Crimean Tatars People is under significant threat as Russian authorities threaten to terminate Parliament, announcing their work as illegal.

Russia's mistreatment of the defenseless ethnic minority has been an incessant problem since the annexation. According to Crimean NGOs, Crimean Tatar mosques and national schools were searched by the Russian Security Service. Many Crimean Tatars have been interrogated and detained under the suspicion of extremism, signaling deprivation of human rights for Crimean Tatars. In addition, Crimean Tatars, living under the legislation of the Russian Federation, have been under serious pressure from the Russian government not to allow them to commemorate the annual meeting of the forcible deportation on May, 18 1944, which resulted in a large number of deportees dying from starvation or disease.

The restrictions on Crimean Tatar media, fear of religious persecution of those who are Muslims, possible physical harassment, the lack of freedom of movement for some Tatar leaders indicates that the democratic rights and freedoms of the Crimean Tatars have been severely deteriorated.

In response to the growing Russian presence in Crimea, the Ukrainian foreign ministry stated that the concentration of Russian troops would destabilize the already bad situation in the Black Sea region. "Having created on a part of Ukraine's sovereign territory a 'gray zone,' which, by de facto, is not covered by current multilateral agreements in the field of arms control, the Russian Federation continues to increase its military presence in Crimea and create a military grouping with unclear objectives," the Ukrainian foreign ministry said, while calling on Russia to "stop provocative actions that threaten the sovereignty and territorial integrity of Ukraine and peace in the region."

The Tatars, 12 percent of Crimea's largely ethnic Russian population of about 2 million, have been highly critical of Moscow's annexation of the peninsula that was previously governed by Ukraine. Local elections took place on September 14. As many Tatar opponents to Putin's Russia have been repressed and forced to sign membership to the ruling pro-Putin United Russia party, the election was apparently considered as "unfair and undemocratic". Increasing pressure on ethnic Crimean Tatars, who are facing raids from ethnic Russians, led to a growing boycott of the elections.

Following the unification of Crimea with Russia, many Crimean Tatar people have been feeling insecure due to the possible return to Stalinist repression despite official promises to respect their rights and freedoms. After the Crimean referendum took place on March 18, many Crimean Tatars were unfavorable to the result of the referendum when 97 percent of Crimean residents chose to join Russia. In the first movement of
Crimean Tatars, it is estimated that many of the 200,000 deportees died on their way into exile in Central Asia and eastern Russia. Until the 1990s, many Crimean Tatar people were not allowed to return to their homeland under Soviet rule.

Now that they have started to live under the Russian control, there has been an increasing distrust in the government authorities because of the sad history of their relations with the Russian government. Considering the historical background, the likelihood of the idea of Moscow government mistreating the Crimean Tatars has led many people fleeing the peninsula out of fear of political persecution.
Last Update: Sep 19, 2014 9:28 am
RELATED TOPICS