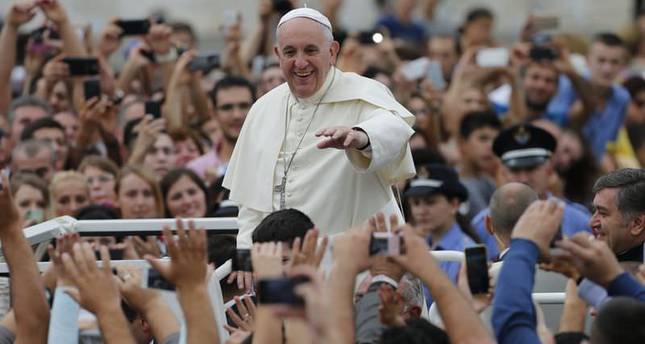 by AA Sep 21, 2014 12:00 am
Pope Francis on Sunday denounced violence in the name of religion in an apparent reference to the ongoing extremist insurgency in Iraq, as he continues his visit in Albania, his first to a European country beside Italy.

"Let no one consider themselves to be the "armor" of God while planning and carrying out acts of violence and oppression! May no one use religion as a pretext for actions against human dignity and against the fundamental rights of every man and woman, above all, the right to life and the right of everyone to religious freedom!" said Pope Francis at a press meeting after his talks with Albanian President Bujar Nishani.

Francis arrived in the Albanian capital of Tirana earlier on Sunday landing at the Tirana International Airport where he was welcomed by Prime Minister Edi Rama.

After the meeting with President Nishani and the press conference, the pontiff held an open-air mass at the Mother Theresa Square in the city center.

Over 2,500 police officers and special forces are deployed for the papal visit.

After a visit to the Catholic university Our Lady of Good Counsel and evening prayer in the Cathedral of Tirana, Pope Francis will meet charity centers of the Catholic Church in Betania Center.

Pope Francis announced in his Angelus address on June 15, 2014 for his visit to Albania and stated the aim of the visit.

"With this brief visit, I want to confirm the Church of Albania in the faith, and bear witness to my encouragement and love for a country that has suffered for so long in consequence of the ideologies of the past," said Pope Francis.

After Albania, he is expected to travel to Strasbourg where he will address the European Parliament on November 25.