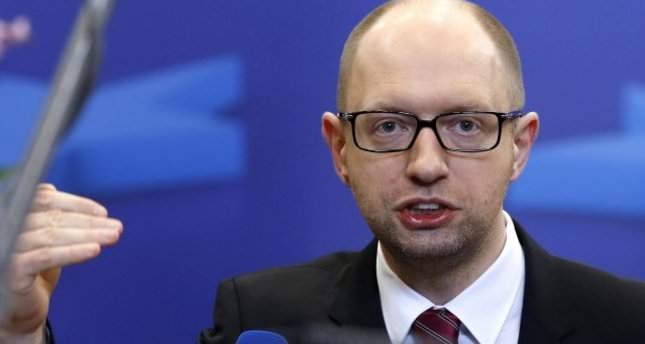 by Daily Sabah Sep 26, 2014 12:00 am
Speaking at the NATO parliamentary assembly, Ukrainian Prime Minister Arseniy Yatsenuk pledged to restore law and order in Ukraine in order to maintain the country's territorial integrity in the face of separatist movements in eastern Ukraine. The Ukrainian prime minister blamed the Russian Federation for increasing tension in the conflict-torn region by allegedly backing and financing rebel groups. "A P-5 member violated the United Nations Charter," he said, targeting Russia and condemning its actions, which are "absolutely and entirely unacceptable."

During his speech, he also reiterated that Ukraine would continue to impose sanctions on Russia over the ongoing crisis until the last threat to its national unity has been eliminated within its territories, including Crimea. "We are the country that needs peace. It's difficult to hammer out any kind of peace deal at the barrel of a gun made in Russia," Ukrainian prime minister said, referring to possible threats posed by Russia to Ukraine's sovereignty. In order to maintain the peace deal, he urged Russia to adhere to its international obligations by fully withdrawing from eastern Ukraine. Addressing Russian President Putin, "You can win the fight against the troops. But you will never win the fight against the nation, the united Ukrainian nation." He also stressed the need for Russia to respect the 12-point protocol agreement signed in Minsk. The Trilateral Contact Group, composed of representatives from Ukraine, Russian and the Organization for Security and Cooperation in Europe (OSCE), reached an agreement during the peace talks in Minsk, Belarus, held on Sept. 5. The Minsk accords include "granting decentralized power to the local self-government in certain districts of Donetsk and Luhansk regions. Ukraine's President Petro Poroshenko said that his country would be ready to defend itself against threats to its integrity if the peace plan fails. Kiev authorities announced that the Ukrainian troops would not pull back before Russian military withdraws from the eastern region.

Since the cease-fire took effect, the proposed peace plan has been held firm despite reported violations in the eastern city of Donetsk. According to the common observations by OSCE monitoring team in Ukraine, a normalizing of the situation has been reported as the intensity of fighting and shelling has gradually decreased. Despite the apparent ease in tensions, the U.N. reported that serious human rights violations in eastern Ukraine have been continuing unabated. According to a U.N. report, some 3,500 people, including hundreds of civilians, have been killed and hundreds of thousands of people have been displaced from their country due to severe clashes between Ukrainian troops and rebel militias in the embattled Donetsk and Luhansk regions.