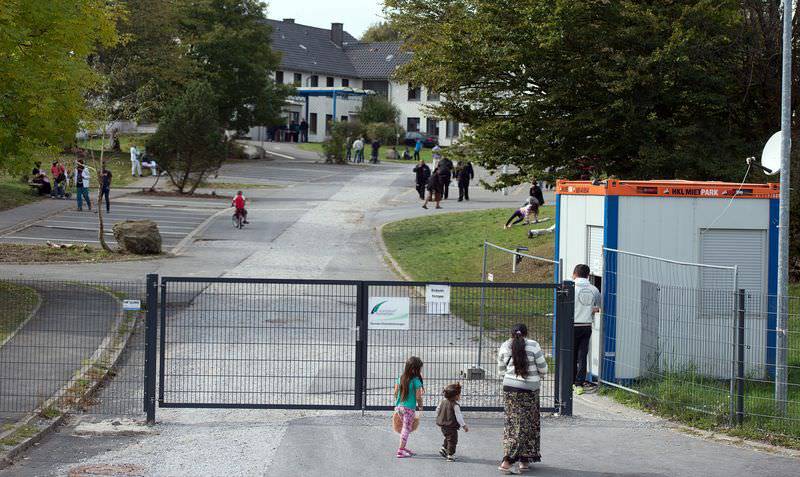 by Daily Sabah Sep 29, 2014 12:00 am
The abuse of asylum seekers by security staff at a refugee shelter in Northern Westphalia (NRW) emerged with the images on the suspect's cellphones. Security forces of the private company SKI, who worked as a subcontractor for the security firm European Home Care, was charged of abuse in the refugee center of Burbach, near the city of Hagen.

NRW Interior Minister Ralf Jäger has called for a swift investigation into the attacks. "We will not tolerate violence against asylum seekers. Those who threaten and harass people in need must be severely punished," he said on Sunday. Hagen city prosecutors and police held a press conference on Sunday about the investigation into the allegations. Government spokesman Steffen Seibert told reporters in Berlin on Monday that "any citizen would be shocked by such pictures and want to know whether what the pictures suggest actually happened." He called for the allegations to be investigated and those responsible to be punished. The police officials said that they started investigations on the alleged firm and questioned hundreds of refugees in the shelter. Four workers were found to be involved in the abuse and two of the accused were previously convicted of acts like violation of the narcotics law and personal injury.

The police chef released an image photographed by a suspect on his cellphone. In the photo, an Algerian asylum seeker is shown lying on the floor, the boot of one man pinning his neck down. Another colleague is knelt beside the victim, seemingly posing for the camera.

"These are pictures that most of us would associate with Guantanamo Bay," said police chief Frank Richter in Hagen. Police and prosecutors are investigating for possible xenophobic motives as well.

Regional public broadcaster WDR first reported the information, where eyewitnesses told the Westpol program about being beaten and humiliated by their guards. WDR said that one of its journalists had been shown smartphone videos of these instances, similar to the photo later released by police. According to WDR, the police was informed of four assault acts between the security forces and asylum seekers in Essen, another German state.

In his statement to ZDF channel, the head of the German Police Union, Rainer Wendt, criticized the privatization of security forces in refugee shelters. He said that, instead of a profit-oriented company, the state authority should run the security unit. Wendt warned that such cases could occur more frequently because of the disastrous situation in refugee shelters. The Arnsberg state government responsible for Burbach announced that the cooperation with SKI has been terminated. However, SKI still operates in two more refugee centers in Neuss and Herne for the European Home Care, one of the largest operators of refugee camps in Germany.