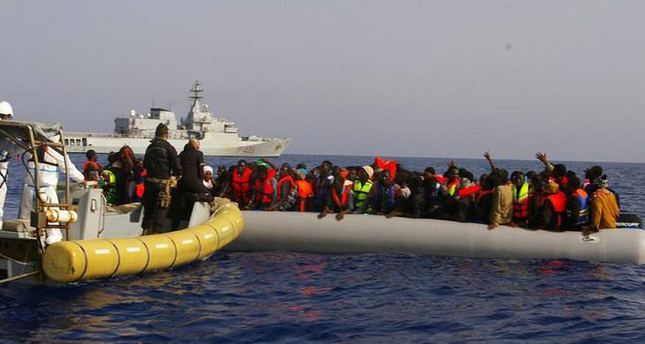 by Sep 30, 2014 12:00 am
The EU's new leadership must boost air and naval power in the Mediterranean to rescue migrants who are dying in record numbers trying to reach the continent's shores, Amnesty International said Tuesday.

A new report by the British-based campaign group described a "Fortress Europe" blocking out migrants and refugees, many of them fleeing unrest in Syria and other parts of the Middle East as well as north Africa.

He drew a cautious welcome from Amnesty after he told parliament that he opposed a "Fortress Europe", that the lives of seaborne migrants must be saved, and that Europe had a "responsibility to protect refugees" fleeing war and conflict.

"We are carefully positive. I think he made some positive noises," Nicholas Beger, who heads Amnesty's European Institutions Office in Brussels, told AFP.

But Avramopoulos gave few specifics when a member of parliament pressed him on some of Amnesty's points.

"The EU and its member countries must urgently provide an increased number of search and rescue vessels in the central Mediterranean, with a clear mandate to save human lives on the high seas," said John Dalhuisen, Amnesty's Europe and central Asia programme director.

The International Organisation for Migration said Monday that more than 3,000 migrants have died trying to cross the Mediterranean so far this year, more than double the previous peak in 2011.

"The EU has a huge moral responsibility," Dalhuisen told a press conference when asked what his message was for the new migration commissioner.

He said this should not be "sacrificed on the altar of political convenience or the political pressures" from EU member states keen to cut the number of migrants they admit.

Amnesty expressed particular concern about whether the EU would fully replace "Mare Nostrum", an Italian military naval deployment that Rome launched after two deadly shipwrecks a year ago, but has now threatened to end without more outside help.

It said the capacity of the European border agency Frontex, which is due to take over responsibility for the mission at the end of November, to provide search and rescue "remains in doubt" as it depends on the resources of member states.

The so-called Frontex Plus mission was a "slightly mealy-mouthed political solution that is very unlikely to deliver" the necessary results, Dalhuisen said.

An EU source said there would be an appeal to member states for contributions in coming days.

The source said the new Frontex mission, dubbed Triton after a mythological Greek sea god, would not replace Italy's Mare Nostrum operation but would operate in tandem with it.

Rome will then decide whether to reduce or stop Mare Nostrum, the source said.


Amnesty meanwhile said the EU's tight land controls -- particularly along the Greek and Bulgarian borders with Turkey -- forced many migrants from the Middle East, sub-Saharan Africa and north Africa to consider "a perilous sea crossing toward Italy or Malta."

But Avramopoulos appeared to stress the need for both strong borders and rescuing migrants while Amnesty put the priority on saving lives.
"Frontex can cooperate with other programmes, such as the programme with Italy, that protects borders but also saves lives," he told the parliamentary committee on civil liberties, justice and home affairs.