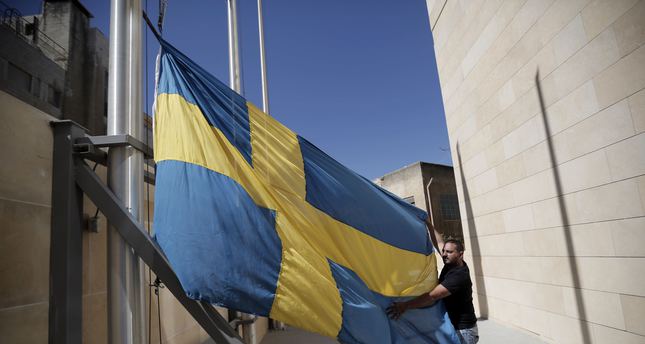 by AA Oct 05, 2014 12:00 am
Israel has described a plan by Sweden's new centre-left government to recognise the state of Palestine as being ill-considered in the absence of Middle East peace negotiations and contrary to agreements.

Israeli Prime Minister Benjamin Netanyahu said that the Swedish declaration was counter-productive and would not facilitate a peace agreement with the Palestinians.

"Unilateral moves are contrary to agreements. They will not bring peace closer, they will distance it. An agreement will only be reached through negotiations which will ensure Israel's national interests, with the security of Israel's citizens foremost among them," Netanyahu said in a statement on Sunday.

Israeli Foreign Minister Avigdor Lieberman said Lofven had "hastened to make declarations ... apparently before he could delve into the matter and understand it is the Palestinians who have constituted the obstacle to progress" in reaching a peace accord with Israel.

Writing on Facebook, Lieberman also said he would summon the Swedish ambassador for a "conversation" at Israel's Foreign Ministry in Jerusalem.

Meanwhile Palestinian president Mahmoud Abbas said the Swedish announcement was "great and honourable" and he hoped other countries would follow suit, according to the official Palestinian news agency WAFA.

Palestinians seek statehood in the Israeli-occupied West Bank and the blockaded Gaza Strip, with East Jerusalem as their capital. They have sought to side-step stalled peace talks by lobbying foreign powers to recognise their sovereignty claim.

The U.N. General Assembly approved the de facto recognition of the state of Palestine in 2012 but the European Union and most EU countries have yet to give official recognition.

In his speech Lofven said the Israeli-Palestinian conflict must be solved with a two-state solution, negotiated in accordance with international law.

"A two-state solution requires mutual recognition and a will to peaceful co-existence. Sweden will therefore recognise the state of Palestine," said Lofven.

Israel says it wants to resume peace negotiations with Abbas but that he must dissolve a unity government formed with Hamas Islamists who control Gaza and preach the Jewish state's destruction. Israel and Hamas have fought several wars, most recently over 51 days in July and August.

The Israelis have long balked at the Palestinian demand for the West Bank, which they have peppered with Jewish settlements, and for East Jerusalem, which they annexed as their capital in a move not recognised internationally.

"Prime Minister Lofven must understand that no declaration nor move by an external player will replace direct talks between the sides that will be part of a comprehensive accord between Israel and the entire Arab world," Lieberman said.

Lieberman, a far-rightist in Prime Minister Benjamin Netanyahu's conservative coalition government, called on Lofven "to focus on more burning problems in the region such as the daily mass-killings going on in Syria, Iraq and elsewhere".