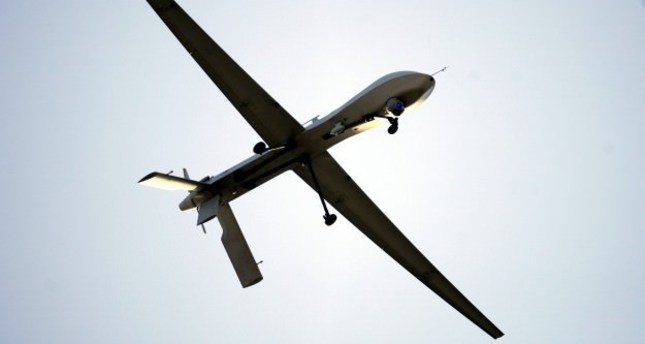 by Oct 06, 2014 12:00 am
The first European drones landed Monday in Ukraine and a top US envoy visited Kiev in an urgent bid to bolster its crumbling truce with pro-Russian fighters.
Ukraine also announced the arrival of winter supplies from Germany for towns and cities devastated by nearly six months of warfare that has killed nearly 3,300 people across the separatist east.
The Western rush in support of Ukraine came one month into a ceasefire that has done little to resolve Europe's worst crisis in decades and still threatens to break the ex-Soviet country apart.
Hundreds of guerrillas -- backed up by tanks and missile systems -- have been tightening the noose around an airport near their stronghold city of Donetsk whose capture is vital to their independence drive.
The Kremlin said Russian President Vladimir Putin told a top security meeting the ceasefire had become "extremely fragile".
The Ukrainian military said one soldier was killed and 13 wounded in the past day of fighting.
Kiev has reported the death of 81 government troops and civilians since the warring sides signed the Moscow-backed peace plan on September 5.
The rebels do not reveal their own losses and Ukraine's claims of heavy casualties in their ranks have been impossible to confirm.


The first two Austrian unarmed aerial vehicles that cleared customs in Ukraine will be part of a four-drone contingent deployed by European monitors along the Russian border and across the war zone.
NATO believes that Russia has withdrawn a "significant" number of the special forces it allegedly snuck into eastern Ukraine to help insurgents set up their own state.
Moscow denies involvement and rejects trying to seize its neighbour's most economically important industrial region in retaliation for the February ouster of a Russian-backed president.
But thousands of Kremlin troops still deployed along Ukraine's eastern frontier have unnerved both Kiev and ex-Soviet satellite nations that are watching Putin with growing mistrust.
The drones will be operated by the Organisation for Security and Cooperation in Europe, a Cold War-era security group that backed the peace agreement and is charged with making sure it works.
Paris said Sunday that France and Germany also intend to send drones to Ukraine in the coming days.
An OSCE spokesman said it was still unclear if those unmanned vehicles would be part of the organisation's mission or flying separately.


The private meeting between US Assistant Secretary of State Victoria Nuland -- a hate figure in Moscow for her open backing of Kiev's Western aspirations -- and Petro Poroshenko came with the Ukrainian president facing tough parliamentary elections at the end of the month.
The truce and his subsequent offer of partial self-rule for the five million people believed to be living in rebel-run regions have been brushed off by insurgents as too limited.
The separatists now intend to keep Kiev from opening eastern polling stations for the October 26 ballot and to hold their own independent polls in early November.
Both dates will be vital for Poroshenko -- a 49-year-old business baron who was elected in May on a vow to crush the uprising.
He has denounced the rebel vote and promised to make sure that -- unlike the presidential ballot -- these elections are staged across the nation of about 45 million.
The State Department said Nuland intended to discuss "US support for Ukraine's territorial integrity" and attempts to eliminate decades of state corruption and waste.
Poroshenko's office said he thanked the State Department's top diplomat for European affairs for Washington's "strong show of support for Ukraine's journey toward freedom and democracy".
But US President Barack Obama -- vocal in his criticism of Putin -- has ruled out any military involvement in the conflict and flatly rejected Poroshenko's request for weapons during their White House talks last month.
Last Update: Oct 06, 2014 6:55 pm
RELATED TOPICS