Unlike in Turkey, pro-PKK peacefully protests over Kobani in Germany 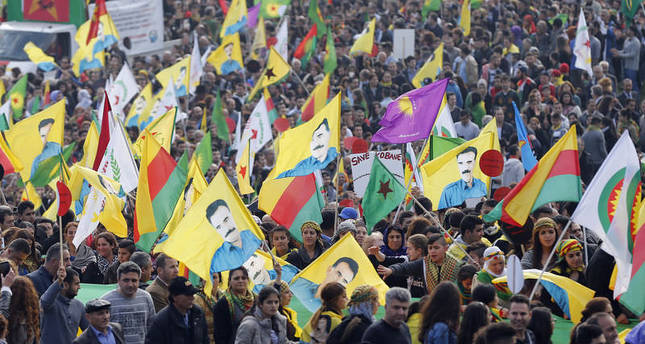 by Daily Sabah with Agencies Oct 11, 2014 12:00 am
More than 20,000 Kurdish residents in Germany have protested against ISIS on Saturday. Police said the demonstration in the western German city of Duesseldorf was peaceful with people marching through the city's downtown area and waving large Kurdish flags.

The protesters are seeking to draw attention to the ISIS' onslaught against the Kurdish town of Kobani in northern Syria. Several similar Kurdish-led demonstrations have taken place across Germany, and much of Europe, in recent days as the siege of Kobani rolls on.

Meanwhile in Turkey the recent pro-Kurdish protests were not so peaceful, causing the street violence and the deaths of at least 33 people across the country after the pro-Kurdish party HDP called its supporters to take on the streets to protest the against self-proclaimed Islamic State of Iraq and al-Sham (ISIS) attacks and lack of international support for in the Kurdish-populated Syrian town of Kobani.