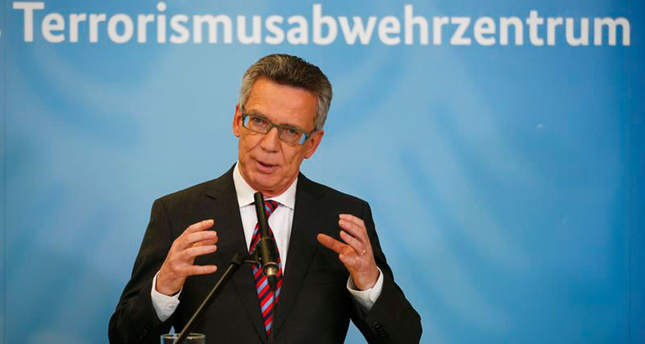 by AA Oct 13, 2014 12:00 am
Germany will not call for the removal of the PKK, from the EU's list of terrorist organizations, German Interior Minister Thomas de Maiziere said Sunday.

Maiziere gave the remarks in a televised interview when he was asked about discussions in Europe about delisting the outlawed group on grounds of resistance to the self-proclaimed Islamic State of Iraq and Sham (ISIS) in Syria.

The minister said the outlawed party was responsible for the recent violent street protests in Turkey.

"The PKK is a terrorist organization and it will continue to stay so for us," he said.

The EU had added the outlawed party to its list of terrorist organizations in 2004. The group is also in the terror lists of the U.S., NATO and Turkey.

Referring to the ISIS's violent treatment of minority groups in Syria and Iraq, the minister said he understood the reaction of the Kurdish and Yezidi peoples.

"Everyone in our country has a right to peaceful demonstrations, but we cannot accept the violence on our streets, occupation of train stations and offices and arson attacks in mosques."

The discussions about the delisting of the group appeared in the U.S. and Europe after the reports came in about Kurdish fighters getting surrounded by the ISIS group in the Syrian town of Kobani town at the Turkish-Syria border.

Turkey has launched, what is publicly known as the "reconciliation process," to end the decades-old conflict with the outlawed PKK. The conflict to date has claimed more than 40,000 people lives in more than 30 years.