UK parliament passes motion to recognize Palestine as a state 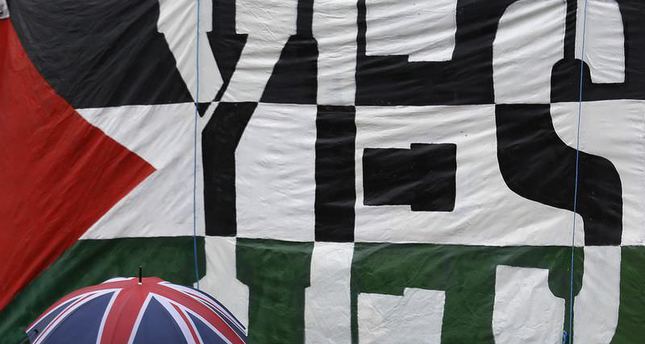 by Oct 14, 2014 12:00 am
British lawmakers voted overwhelmingly in favour of recognizing Palestine as a state on Monday, in a non-binding motion heavy with symbolism but unlikely to change government policy.

The motion was passed by 274 in favour to 12 votes against, to "recognize the state of Palestine alongside the state of Israel" as part of a "contribution to securing a negotiated two-state solution".

The House of Commons debate was being watched around the world after Sweden drew anger from Israel this month for saying it would recognise Palestine.

As the debate was initiated by a backbencher, Grahame Morris from the main opposition Labour party, the government was not bound to act because of it.

During the debate, Middle East Minister Tobias Ellwood said that a Palestinian state would only be recognised at the appropriate moment.

"The aspirations of the Palestinian people cannot be fully realised until there is an end to the occupation... and we believe this will only come through negotiations," Ellwood said.

"Only an end to the occupation will ensure that Palestinian statehood becomes a reality on the ground." The UK will bilaterally recognise a Palestinian state when we judge that it can best help bring about the peace."

Members of the government, which backs a two-state solution, had said they would abstain from the vote, Prime Minister David Cameron's official spokesman said.

Morris said Britain had a "moral responsibility" to act because of its history as colonial power in the region.

"It's absolutely clear that Israel-Palestine relations are stuck at an impasse, as is our foreign policy," Morris said as he opened the debate.

"Both of these impasses must be broken. We hear a great deal of talk about the two-state solution but today, through validating both states, members will have the opportunity to translate all of that principled talk into action."

The debate follows the collapse of peace talks between Israel and Palestine and this year's conflict in Gaza in which more than 2,000 Palestinians and dozens of Israelis were killed.

An online petition paving the way for the debate attracted more than 111,000 signatures, Morris said.

Before the debate, a handful of protestors gathered in pouring rain outside the Houses of Parliament, where they had erected a giant banner saying: "Yes Vote for a Palestinian State".

"If there is a state, the aggression would stop and the healing could begin," said one of them, Eddie Clarke.

The Palestinian Authority estimates that 134 countries have recognised Palestine as a state, although the number is disputed and several recognitions by what are now European Union member states date to the Soviet era.

Britain abstained in 2012 from a vote in the United Nations on giving the Palestinians the rank of observer state, which was granted over the objections of the United States and Israel.