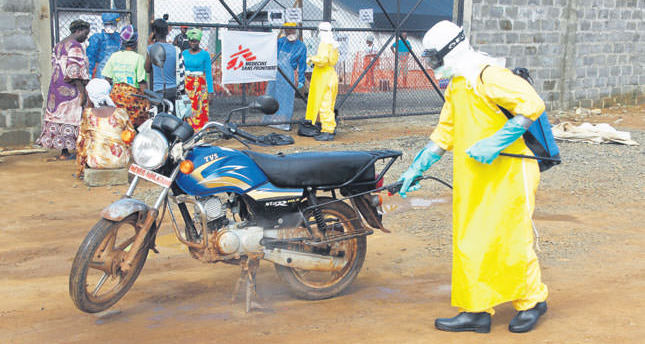 As Ebola continues to spread in Europe, the international community struggles to find a way to prevent the spread of the disease as the United Nations calls for anti-Ebola drive

A U.N. health worker has died of Ebola in Germany as the international community prepared to hold talks on the crisis on Tuesday. The death of the 56-year-old Sudanese man, who arrived in Germany from Liberia last week for treatment, highlighted the global struggle against what officials have termed the worst health crisis of modern times.

The U.N. was due to hold talks on the spread of the hemorrhagic virus, a day after U.S. President Barack Obama and U.N. Secretary General Ban Ki-moon called for the international anti-Ebola drive to be stepped up.

The Ebola epidemic has killed more than 4,000 people this year, mostly in Guinea, Sierra Leone and Liberia, prompting the World Health Organization (WHO) to brand it "the most severe acute public health emergency in modern times."

At least two cases of contamination have been reported beyond West Africa, in the U.S. and Europe.

The German clinic in the eastern city of Leipzig, one of three in the country to have treated Ebola patients, said the man had died during the night "despite intensive medical care and the best efforts by medical staff."

The U.N. announced the following day that it had quarantined 41 personnel from its Liberia mission, including 20 soldiers.

Germany has also treated two other Ebola patients infected in Sierra Leone - a Senegalese expert who was treated in Hamburg and released on October 4, and a Ugandan doctor now being treated in Frankfurt.

After measures were introduced in the U.S. and Canada, Britain began screening for Ebola at Heathrow Airport, the first of a number of London airports and Eurostar rail hubs where travelers from the worst-hit countries of west Africa will be questioned and have their temperature tested.

Health workers in Liberia meanwhile pressed on with a strike demanding danger money to treat Ebola patients. Obama and Ban called Tuesday for "more robust commitments and rapid delivery of assistance by the international community," the White House said in a statement.

In the face of panic that was "spreading faster than the virus," the WHO issued a stark warning over the crisis. "I have never seen a health event threaten the very survival of societies and governments in already very poor countries," said WHO Chief Margaret Chan in a statement delivered on her behalf at a conference in Manila.

Ninety-five Liberian health workers have died so far in the epidemic, and their surviving colleagues want pay commensurate to the acute risk of dealing with Ebola, which spreads through contact with bodily fluids and for which there is no vaccine or widely available treatment.

In the Liberian capital Monrovia, a hospital patient quoted on local radio described scenes of desolation, with the sick deserted by striking staffers. "We are at the Ebola Treatment Unit and no-one is taking care of us," the unnamed man said. "Last night several patients died. Those who can walk are trying to escape by climbing over the fence."

Journalists have been banned from Liberia's Ebola clinics, making the situation there difficult to ascertain. Both cases of contamination reported so far outside Africa -- in Spain last week and now in the U.S. - have involved health workers who fell ill despite stringent safety protocols surrounding Ebola.

U.S. health authorities said the U.S. must "rethink" its approach to Ebola after a female nurse in Texas contracted the virus, in the first case of contamination on U.S. soil.

The nurse at Texas Health Presbyterian Hospital in Dallas is in isolation and said to be in a stable condition.

Spanish Health Minister Ana Mato was due to appear before parliament to face questions over the infection of the nurse, Teresa Romero, who caught the Ebola virus in a Madrid hospital after caring for two missionaries with Ebola.

She remains in a "very serious condition," according to a crisis cell set up after the case.