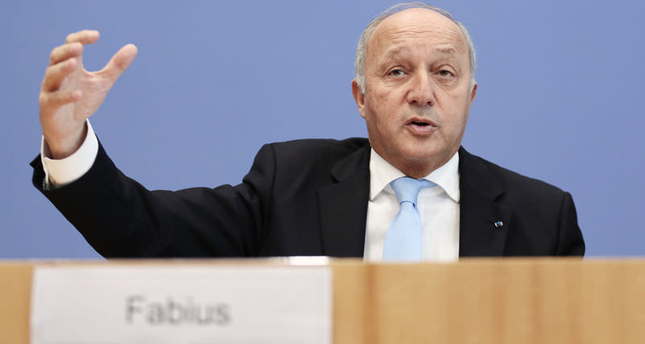 by Daily Sabah Oct 15, 2014 12:00 am
In response to Britain's symbolic and non-binding vote on the recognition of Palestinian statehood, France's foreign minister said Tuesday that France would only recognize Palestine as a state after peace negotiations are maintained on stable ground. "From the moment that we say there must be two states, there will be a need for the recognition of the Palestinian state, that goes without saying," French Foreign Minister Laurent Fabius said during his address to the lower house of the French parliament. "The only questions are what the procedures [should be] and how [they can] be most effective. What we want is not a symbolic issue, but to be helpful to peace," he added while stressing the need for comprehensive and permanent solutions to the Israel-Palestine conflict. Fabius's comments were made in reference to the ongoing peace talks between Israel and the Palestinian Authority, which collapsed due to the recent Gaza War, as well as the reunification of Fatah and Hamas – the two ruling Palestinian factions.

"Until now, the prevailing idea was that recognition should be linked to the negotiations. But if negotiations were to prove impossible or have no conclusion, then France will naturally have to assume its responsibilities," Fabius said.

France's stance on the Israel-Palestine conflict has been in favor of the creation of a Palestinian state as France supports Palestine's membership in the U.N. cultural agency, UNESCO, and its observer non-member state status at the U.N. However, during the Israeli military operation dubbed "Operation Protective Edge," French President François Hollande supported the Israeli onslaught on the Gaza Strip while describing the Israeli attacks as self-defense.

After the Israeli onslaught on Gaza, Palestinian statehood has gained significant attention in the international community. The British move came two weeks after Sweden pledged it will recognize Palestine leading lawmakers in Britain's lower house of parliament to pass the motion 274 to 12. However, the motion is non-binding for the British government. The move is seen as a "contribution to securing a negotiated two-state solution" and a significant step for Palestinians in their pursuit of international recognition.

As part of the efforts for Palestine's international recognition, the U.N. vote in 2012 gave Palestine the status of observer non-member state. A total of 138 members voted in favor of Palestine with only nine voting against and 41 nations abstaining. The Palestinian delegation followed with an application to join the international body as a full member state in 2011. However, Palestine's move has failed due to a lack of support from the U.N. Security Council.