Putin, Poroshenko to meet for peace in east Ukraine 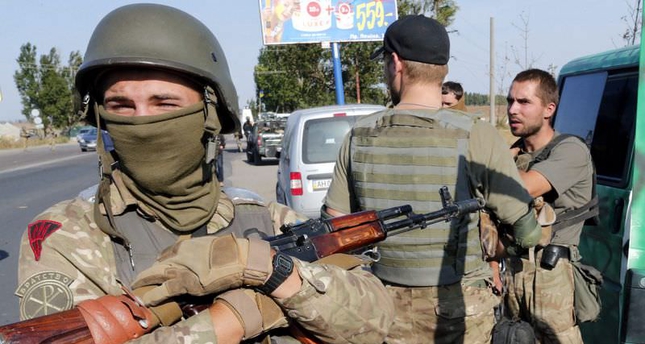 by Oct 15, 2014 12:00 am
A long-running dispute over natural gas supplies will be on the agenda when Russian President Vladimir Putin and Ukrainian leader Petro Poroshenko hold talks in Italy later this week, the Kremlin said.

A Kremlin statement issued late on Tuesday said the Ukrainian and Russian presidents had spoken by telephone and discussed measures to restore peace in eastern Ukraine.

They are expected to continue discussions on the conflict as well as on the gas dispute on the sidelines of a summit of European and Asian leaders they are both attending in Milan on Oct 16-17.

Ukraine faces a possibility of energy shortages this winter if no deal is reached, risking a replay of the disruptions to Europe's gas supplies seen in 2006 and 2009. Europe receives a third of its gas needs from Russia, and around half of it is pumped via Ukraine.

Officials from Russia and the European Commission, which is mediating the talks, say a deal could be near. Poroshenko said on Saturday he hoped for "significant progress" on the issue during the talks on Milan.

Efforts to reach agreement have been complicated by the conflict in eastern Ukraine. Ukraine and the West accuse Russia of providing pro-Russian separatists there with extra troops and weapons, a charge Moscow denies.

The conflict has caused the worst standoff in Moscow's relations with the West since the Cold War, with the United States and the European Union having imposed sanctions on Russia over the crisis.

Deep divisions remained between Washington and Moscow after talks between U.S. Secretary of State John Kerry and Russian Foreign Minister Sergei Lavrov in Paris on Tuesday.