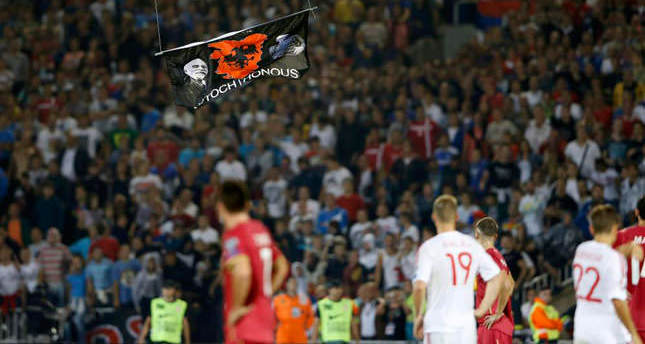 U.S. Secretary of State John Kerry said on Tuesday that there is no discrepancy between Turkey and the anti-ISIS coalition, as Turkish and American officials continue to hold talks on the extent to which Turkey will participate in the coalition

Football matches have always been the theater for disputes between two political groups, economic classes or nations. National teams are often viewed as if they represent the country's political interests and history. Allied countries often support each other on the pitch while troubled ones, generally, have shown nothing but aggression to each other during games. For instance a riot between fans of Dinamo Zagreb of Croatia and Serbian club Red Star Belgrade played a key role in the run-up to the start of the 1991-95 war that led to Croatia's independence and Yugoslavia's break-up. The riot erupted just weeks after Croatian groups demanding independence had won the first multi-party elections. Sixty people were beaten, stabbed or injured with tear gas in the riot.

A classic example was seen around the world on late Monday during a football match between Albania and Serbia, two deeply-troubled countries, which have had deadly clashes in the recent past.

The Euro 2016 qualifying match marked the first time that Albania has played in Belgrade since 1967. Tensions were high from the kick-off, with hundreds of police deployed in advance of the game. The Group I game, with no away fans permitted, was interrupted when a flag depicting the so-called Greater Albania, an area covering all parts of the Balkans where ethnic Albanians live, was flown over the terraces and the pitch by what appeared to be a remote controlled mini drone near the end of the first half. A Serbian player eventually grabbed the flag in the Partizan Stadium, prompting an angry reaction from Albanian players and an unsightly melee ensued. Riot police then moved in when around a dozen fans invaded the pitch and attacked the Albanian players, forcing them to retreat into the tunnel as flares were thrown from the terraces. After a delay of around half an hour, English referee Martin Atkinson abandoned the game, which stood at 0-0.

"What happened is something we can't comprehend at the moment," Serbia captain Branislav Ivanovic told reporters. "On behalf of my team, all I can say is that we wanted to carry on and that we shielded the Albanian players every step of the way to the tunnel [after the riot broke out]. The Albanian team said they were unfit physically and mentally to carry on after talking to the officials and they will now decide the fate of this match. We can only regret that football took a back seat but it is difficult to draw any conclusions or make any comments now," he said. Albanian captain Lorik Cana told Albanian television: "I saw my players being attacked and hit even inside the tunnel, and even by the stewards. We were not in the right psychological or physical state to continue playing."

Serbian state television reported that Olsi Rama, the brother of Albanian Prime Minister Edi Rama, was arrested in the VIP section on suspicion of instigating the flag stunt. Albanian Interior Minister Saimir Tahiri said that, to the best of his knowledge, Olsi Rama had left the stadium for the airport, according to information he had from Serbia's interior ministry and Albanian officials in Belgrade.

Security was tight for a game at which no away fans were present and held against a backdrop of long-running Serbian-Albanian tensions over Kosovo, a majority-Albanian former Serbian province that declared independence in 2008. NATO waged a 78-day air war in 1999 to halt the killing and expulsion of ethnic Albanians in Kosovo by Serbian forces fighting a two-year counter-insurgency war. Serbia does not recognize Kosovo as an independent state.

It is still unclear how UEFA will act. But it is certain that the issue is in violation of the rules. The political dispute that spread to the football pitch may be overcome through launching political reconciliation under the mediating role of a country, according to experts. At the moment, Turkey appears to be one of the possible candidates for playing the mediator role as the two countries have good political and economic relations with Turkey. However, no official from either side has made any statement concerning the solution of the issue that may trigger further provocations.