US, Europe vulnerable and concerned about Ebola 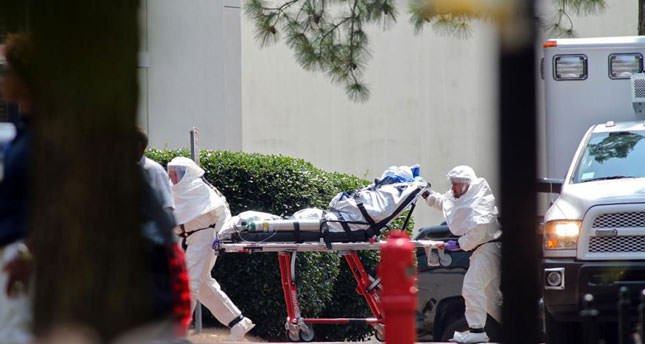 U.S. and European governments are looking to find a solution for battling Ebola while the fear of Ebola spreading increases. Yet, there is no solid solution on the table

President Barack Obama said he was considering appointing an Ebola "tsar" to coordinate the fight against the virus in the United States, but he remained opposed to a ban on travel from West Africa. Obama's administration is facing sharp criticism from lawmakers over its efforts to contain the disease at home. Obama authorized calling up military reservists for the U.S. fight against Ebola in West Africa on Thursday. U.S. concerns have intensified after two Texas nurses who cared for a dying Liberian patient contracted the virus that has killed nearly 4,500 people. Federal health officials said they were broadening their outreach to people who may have come into contact with one of the workers. Spain is also grappling with the spread of the disease, with four new patients with suspected Ebola symptoms admitted to hospitals. The disease continues to spread in West Africa where the outbreak began in March, and reached the last remaining district in Sierra Leone that had not been affected by Ebola.

U.S. lawmakers held a congressional hearing about the administration's handling of the Ebola outbreak in the United States. Some have called for a tsar and a ban on travel from West Africa. "It may be appropriate for me to appoint an additional person" to oversee efforts to contain Ebola, Obama told reporters, adding that experts have told him "a flat-out travel ban is not the way to go" because current screening measures at airports are working. He said he had no philosophical objection to a travel ban but that some travelers might attempt to enter the United States by avoiding screening measures, which could lead to more Ebola cases, not fewer. U.S. Federal Aviation Administration chief Michael Huerta told reporters separately that the government was assessing whether to issue a travel ban "on a day-to-day basis." Jamaica announced an immediate travel ban on Thursday and Guyana said it has denied entry to citizens from four Ebola-hit West African nations during the past five weeks. Amber Vinson, one of the nurses who treated the Ebola patient at Texas Health Presbyterian Hospital in Dallas and contracted the virus, traveled to Ohio over the weekend on a Frontier Airlines flight while running a slight fever. Dr. Christopher Braden, a spokesman for the Centers for Disease Control and Prevention (CDC), said Vinson may have been ill as early as Friday, when she boarded the flight from Dallas to Cleveland. The CDC said it was expanding its search for people who could have been exposed to Vinson to include passengers on her flight to Cleveland, Frontier Airlines flight 1142, in addition to those on her Monday return trip to Texas, flight 1143. The CDC said health professionals would interview passengers and arrange for follow up monitoring if necessary. The Los Angeles Times reported that Frontier also said it would contact some 750 other passengers who had flown on different flights, but the same plane as Vinson. Dr. Thomas Frieden, the CDC director, has said it is unlikely passengers who flew with Vinson were infected because the nurse had not vomited or bled on the flight, but he said she should not have boarded the plane. Concerns about Ebola exposure prompted several schools in Ohio and Texas to close because people with ties to the schools may have shared the flight with Vinson. An air ambulance transported Vinson to Atlanta's Emory University Hospital on Wednesday for treatment. The first nurse to contract Ebola, Nina Pham, 26, was flown to the National Institutes of Health (NIH) in Bethesda, Maryland, to be treated in an isolation unit.

A YouTube video made by Pham's physician Dr. Gary Weinstein before her discharge showed her in a bed at Texas Health Presbyterian Hospital and with Weinstein in protective gear. In the video, Pham wiped away tears and said, "Come to Maryland, everybody!" and "I love you guys." She requested that the video be shared by the hospital. More than a week after the death of Thomas Eric Duncan, the first patient diagnosed with Ebola in the United States, the Texas Health Presbyterian Hospital acknowledged it made mistakes in diagnosing Duncan and in giving the public information. Dr. Daniel Varga, chief clinical officer and senior vice president of Texas Health Resources which owns the hospital, said the hospital was "deeply sorry". He said there had been no Ebola training for staff before Duncan was admitted. The hospital defended its treatment of Duncan, saying it had followed CDC guidelines. Criticisms that had surfaced in the media about its Ebola treatment "are often out-of-context and sensationalized. Others are completely inaccurate," it said. In the congressional hearing, several Republicans said flights from West Africa should be stopped. "We need to look at all the options available to keep our families safe and move quickly and responsibly to make any necessary changes at airports," Democratic Representative Bruce Braley of Iowa told the hearing. The virus is spread through direct contact with bodily fluids from an infected person showing symptoms of Ebola. Ebola is not airborne. Frieden argued, as he has before, that closing U.S. borders would not work and would leave the country less able to track people with Ebola entering. Moreover, cutting flights to Africa would hit the ability to stop the virus at its source, he said.