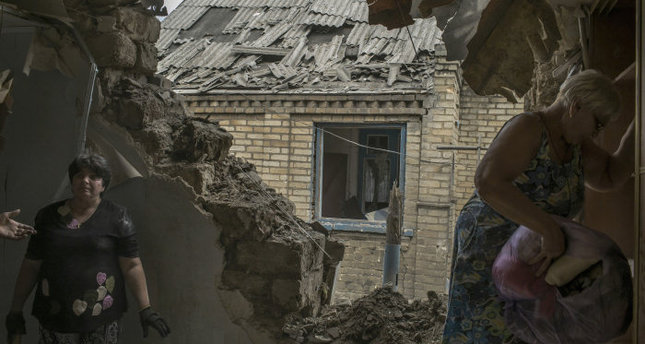 by Daily Sabah Oct 20, 2014 12:00 am
The mediating efforts between the European Union, Ukraine and Russia have led to no significant improvement so far to end the months-long pro-Russian separatist rebellion in eastern Ukraine. Friday's meeting in Milan, Italy between the leaders of Russia, Ukraine and the EU proves that the Russian position is still too wide to reconcile, therefore Russia's conflicting interest over the Ukrainian crisis prevents a sustainable settlement between Kiev and eastern Ukrainian separatists. Russian President Vladimir Putin rejected the charges that the Moscow government backed, armed and financed the pro-Russian separatist groups in the embattled east of the country while calling the conflict-torn region a part of Russian territory. Therefore, the Milan talks could not produce a breakthrough over issues relating to the settlement of the crisis in Ukraine. As the Miltan talks failed to provide a breakthrough for the crisis, envoys from Russia, Ukraine and the EU are holding another trilateral meeting this week in Brussels with the aim of ending the crisis.

Underscoring the need for implementing the Minsk accords of Sept. 5 in order to achieve peace in Ukraine's east, Ukraine President Petro Poroshenko said, "With regard to the peace process, we have confirmed that the Minsk protocol dated Sept. 5 and the Minsk memorandum dated Sept. 19 are the key documents that must be observed." However, since the cease-fire agreement came into effect, the heavy fighting has continued in the embattled east. The ongoing clashes have turned the city of Donetsk into a combat zone, as the rebel groups continue attacking the Donetsk airport. Meanwhile, pro-Russian rebels stipulated the need for Russia to act as a guarantor in the peace process. "We welcome Russia's possible involvement in the mediating efforts toward separating the conflicting parties, as well as the use of Russian drones in monitoring the situation. Certainly, if Russia acts as a guarantor for security in the region, we are ready to stop firing and withdraw our weapons from the contact line," the self-proclaimed Donetsk People's Republic (DPR) First Deputy Prime Minister Andrei Purgin told Interfax-Ukraine news agency on Saturday. Since the fighting erupted, at least 3,660 people have been killed and 8,756 wounded in eastern Ukraine as of Oct. 6, according to United Nations reports regarding the deteriorating situation in Ukraine. The ongoing armed conflict has left many people in worsening humanitarian conditions as some armed groups continue to terrorize the lives of civilians in areas where the conflict has been raging.