Albanian and Serbian politicians not to further crisis 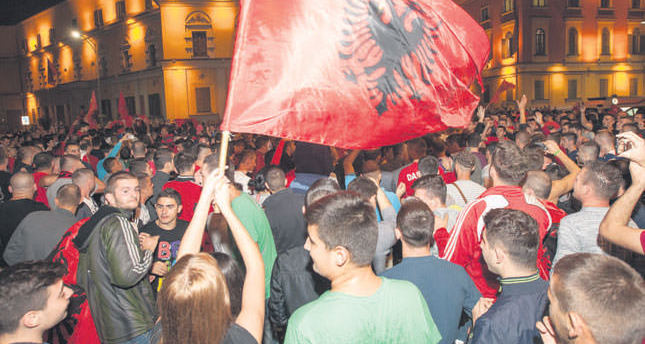 by Daily Sabah Oct 21, 2014 12:00 am
The football match, played last week between Albania and Serbia, was interrupted when a flag depicting the so-called Greater Albania, an area covering all parts of the Balkans where ethnic Albanians live, was flown over the terraces and the pitch by what appeared to be a remote controlled mini drone near the end of the first half. A Serbian player eventually grabbed the flag in the Partizan Stadium, prompting an angry reaction from Albanian players and an unsightly melee ensued. Riot police then moved in when around a dozen fans invaded the pitch and attacked the Albanian players, forcing them to retreat into the tunnel as flares were thrown from the terraces. After a delay of around half an hour, English referee Martin Atkinson abandoned the game, which stood at 0-0. The incident caused unrest as the game between the two countries held against a backdrop of long-running Serbian-Albanian tensions over Kosovo, a majority-Albanian former Serbian province that declared independence in 2008. NATO waged a 78-day air war in 1999 to halt the killing and expulsion of ethnic Albanians in Kosovo by Serbian forces fighting a two-year counter-insurgency war. Serbia does not recognize Kosovo as an independent state.

The tension did not decrease immediately and a melee erupted last week that reintroduced ethnic hatred and violence between Albanians and Serbians. "The crowd of a thousand Serbian fans exploded with hate and threatening screams, such as 'Kill the Albanians,'" said Ditmir Bushati, the Albanian Minister of Foreign Affairs, in a statement issued last week. "That was not all. The Serbian fans located below the VIP gallery where Serbian and Albanian personalities were seated repeated the same vulgar shouts and offensive gestures toward the Albanian guests," he added. The Serbs burnt Albanian flag in Belgrade streets and "Regretfully, we note the hooliganism of the Serbian fans and pathological hatred towards Albanian symbols was once again displayed in Belgrade, in a match that had nothing to do with Albania or Albanians," Albanian Foreign Ministry said in a statement. The ministry called on Serbian authorities to bring the perpetrators to justice and urged the Serbian political class to distance itself from such acts. It said such incidents could have grave consequences for the future stability of the Balkans. Moreover, A mosque in northern Serbia was attacked with Molotov bombs Saturday night.

The Islamic Association of Serbia condemned the attack in Vojvodina Province's Subotica city, where Orthodox Christians and Catholic Christians live in peace with Muslims.

Ibazer Yzeiri, head of the Islamic Association Council in Subotica, told Anadolu Agency the entrance of the mosque was attacked with a Molotov bomb. He said the fire was extinguished with the help of their Christian neighbors.

However, both countries' politicians do not want these incidents to grow up due to the countries' relations with European Union that would not be pleased with facing a conflict nearby. Therefore Albanian Prime Minister Edi Rama was scheduled to pay a visit to Belgrade on Oct. 22. According to a statement issued by the Albanian prime minister's office, Rama spoke with Serbian Prime Minister Alexander Vucic on Sunday in which both leaders agreed that violent incidents that accompanied the Serbia-Albania match had been "extremely undesirable."

"The two prime ministers clearly disagreed with what happened in Belgrade, but they agreed they must not and will not lose the opportunity to meet and work together in the interest of regional stability, and open a new chapter in bilateral economic and political relations," the statement said. However, the prime minister postponed his visit to Nov. 10 to wait for the decrease of the tension among the peoples of the two nations.