Relations between EU and UK tense over UK’s changing policy 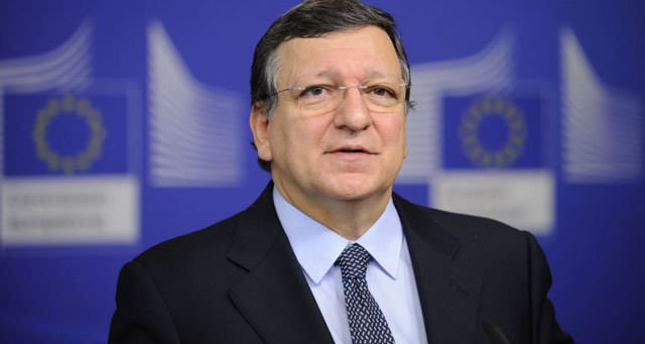 European Commission president criticizes Britain’s proposed reform of the freedom of movement principle, saying that the EU bloc would never accept it

In a direct blow to the British immigration cap, the outgoing European Commission (EC) president Jose Manuel Barroso warned that Britain's tough stance on the EU's immigration policy would deteriorate relations with other EU member states as it creates "first- and second-class citizens" within the EU. [British] Prime Minister [David] Cameron's reform plan on cutting the number of EU immigrants with low skills would be "incompatible with EU law," which favors free movement of capital, goods and people within the borders of the EU.

"Any kind of arbitrary cap seems to me to be not in conformity with European laws. Because for us, the principle of non-discrimination is very important," the Commission chief said in a speech at the London-based Chatham House, the Royal Institute of International Affairs think tank on Monday. "The freedom of movement is a very important principle in the internal market: Movement of goods, of capital, of services and of people," he added.

Amid widespread support from other EU member states for keeping Britain in the EU, the British prime minister's latest proposal to reform EU immigration policy would "alienate" mainly EU members from Eastern Europe whose citizens benefit most from the EU immigration policy that supports freedom of movement within the EU. "It would be a historic mistake if Britain was to continue to alienate its natural allies in central and Eastern Europe on these issues, when you were one of the strongest advocates for their accession," Barroso said. "There are widespread concerns in the U.K. and elsewhere about the abuse of free movement rights […] I believe that any further changes […] should not put into question this basic right, which cannot be decoupled from other single market freedoms," he said, stressing the need to protect the freedom of movement within the bloc.

The U.K. has long demanded EU reforms in order to maintain strong relations between the bloc's countries. Britain wants its demands to be heard in order to encourage its citizens to cast a "no" vote in the in/out referendum on British membership in the EU by the end of 2017. Amid Britain's call for EU reforms, the bloc countries would be expected to sit at the table for renegotiation. As Britain's renegotiation strategy includes the reform of the movement principle, whether the EU member states would accept the terms proposed by Cameron is a highly controversial matter. This would also shape the future relationship between Britain and the EU.

Cameron's campaign to block the president-elect Jean-Claude Juncker, whom he sees a consensus-favoring federalist, received strong opposition from the bloc during the election of the EC president in June. Merkel's endorsement of Juncker's commission bid gained considerable support from Europe's center-left leaders. Britain has long rejected integrationist policies of the EU due to the strong line taken on the EU and immigration policies.

Migration to Britain from other countries in the EU has been a sensitive issue, as many immigrants have sought residence in the U.K. due to better living conditions. However, there has been growing concern over the increasing number of immigrants living in the country. This led to an increase in votes for the anti-EU and anti-immigration U.K. Independence Party (UKIP) over the past year. The border control and security issue is placed at the heart of its electoral campaigns, as the recent opinion polls show that there is a steady increase in support for UKIP.