Cameron hits back at Barroso’s criticism over immigration cap 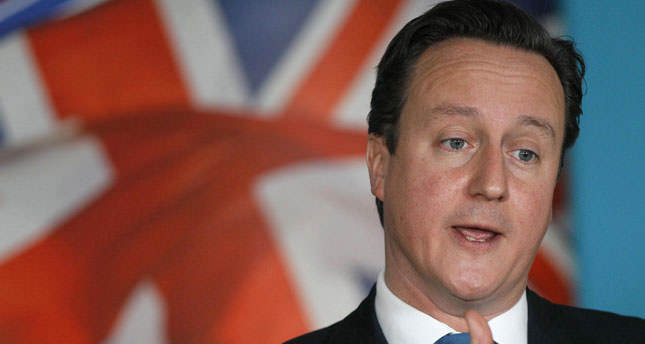 by Daily Sabah Oct 22, 2014 12:00 am
British Prime Minister David Cameron responded to criticism from the outgoing president of the European Commission, José Manuel Barroso, over the British government's planned immigration cap, saying that only the British people are the "boss" over EU reform. Cameron's reform plan on cutting the number of EU immigrants with low skills has received severe criticism from Barroso who accused Britain of making a "historic mistake." The latest British move is expected to hit the eleven Eastern European states whose citizens benefit most from the EU immigration policy that supports freedom of movement within the EU. As part of a renegotiation strategy with the EU, whether EU member states would accept the terms proposed by Cameron over the EU immigration policy reform is a highly controversial matter. This would also shape the future relationship between Britain and the EU.

"What we need in Britain is a renegotiation of our relationship with the EU and then a referendum where the British people decide [if] we stay in this reformed organization or [if] we leave it," said British prime minister, speaking during a visit to the Ford Motor plant in Dagenham, east London, on Monday, while signaling the in/out referendum in 2017, as the Guardian reported.

"I am very clear about who the boss is, about who I answer to and it's the British people. They want this [immigration] issue fixed. They are not being unreasonable about it, and I will fix it."

"That is what I will pursue, that's what I will deliver, and at the heart of that renegotiation, we need to address people's concerns about immigration," he said, stressing the growing pressure from anti-EU camps to change the U.K.'s immigration policies. Migration to Britain from other countries in the EU has been a sensitive issue. There has been growing concern over the increasing number of immigrants living in the country. This has led to an increase in votes for the anti-EU and anti-immigration U.K. Independence Party (UKIP) over the past year. The border control and security issue is placed at the heart of its electoral campaigns, as recent opinion polls show that there is a steady increase in support for the UKIP.

As Cameron hardens his line on immigration, the top European diplomat, Barroso, said that the new EU immigration cap would breach EU law; therefore, a change in the free movement of EU citizens would be impossible to implement as it creates "first- and second-class citizens" within the EU. The free movement of people has been guaranteed as one of the founding principles of the Treaty of Rome in 1957. "When this discussion progresses, some governments in Europe will say clearly: There is a limit to what we can offer you," said Barroso, indicating that no member state including Britain can go beyond "red lines" that are the founding principles of the European Union.