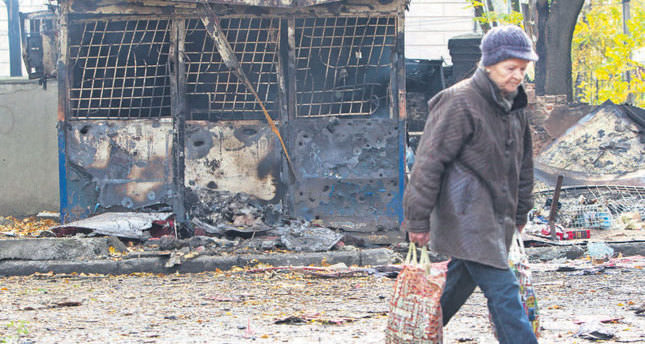 Human Rights Watch claim that Ukrainian government forces as well as the rebels have used cluster munitions, which may leave untreatable wounds on the victims of the war

Evidence collected by Human Rights Watch suggests government forces have used cluster munitions in eastern Ukraine and pro-Russian separatists may also have done so, the New York-based watchdog said on Tuesday. Spokesmen for the Kiev government's military operation and the pro-Russian rebels they are fighting in the east denied the accusations. Cluster bombs explode in the air, scattering dozens of smaller bomblets over an area the size of a sports field. Most nations have banned their use under a convention that became international law in 2010, but Ukraine has not signed it.

Human Rights Watch said in a statement that it had carried out a week-long investigation in eastern Ukraine, where more than 3,700 people have been killed in fighting since April, and documented widespread use of cluster munitions. It said it could not conclusively determine responsibility for many of the attacks but "the evidence points to Ukrainian government forces' responsibility for several cluster munitions attacks" this month on Donetsk, the rebels' main stronghold. "It is shocking to see a weapon that most countries have banned used so extensively in eastern Ukraine," said Mark Hiznay, senior arms researcher at Human Rights Watch. "Ukrainian authorities should make an immediate commitment not to use cluster munitions and join the treaty to ban them."

In 12 incidents documented, cluster munitions killed at least six people and wounded dozens, but the toll could be higher, the watchdog said. The incidents included the killing of a Swiss International Red Cross worker in Donetsk on Oct.2, it said. Human Rights Watch said it had identified the cluster munitions by their distinctive crater and fragmentation patterns, by remnants found at the impact sites and by remnants of the rockets found in the vicinity. "We do not use cluster munitions. They can only be used by aviation and our aviation has not flown since the announcement of a ceasefire on September 5," said military spokesman Andriy Lysenko.

Another ATO spokesman, Vladyslav Seleznyov, described the accusations as 'utter nonsense.' Human Rights Watch added: "While not conclusive, circumstances indicate that anti-government forces might also have been responsible for the use of cluster munitions." Andrei Purgin, who has been appointed deputy prime minister of the self-proclaimed Donetsk People's Republic, said rebel forces had no access to Uragan (Hurricane) rockets which the rights group accused Kiev of using with cluster munitions. "We have old Soviet rockets but no Uragans. We simply haven't seized them from the Ukrainians," Purgin said by telephone.

Pro-Russian rebels say most of their weapons are from seized Ukrainian arms stockpiles, though Kiev and the West accuse Moscow of sending the separatists weapons and soldiers. Russia has denied sending troops or weapons to help the rebels but Human Rights Watch urged Moscow to commit to not using cluster munitions and accede to the cluster munitions treaty.