Cease-fire still in effect in Ukraine despite violations 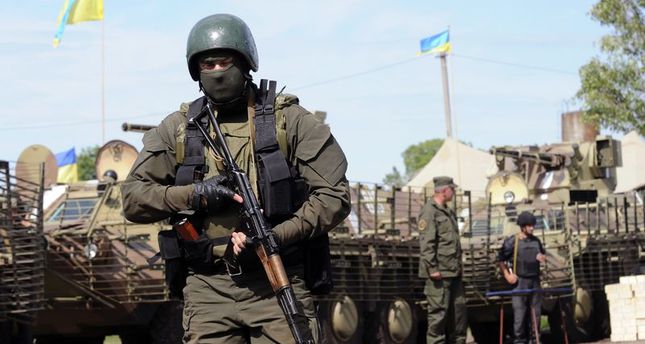 by Daily Sabah Oct 23, 2014 12:00 am
After unfruitful mediation efforts in Milan to resolve the crisis in eastern Ukraine, Ukrainian President Petro Poroshenko and his Russian counterpart Vladimir Putin agreed that the increasing armed attacks with heavy weaponry must be stopped through full observance of the cease-fire agreement, according to a press statement released by the Ukrainian Presidency. During a phone conversation the two leaders exchanged their views on bilateral issues, including the security situation in the restive east of the country and natural gas issues.

Meanwhile, a massive explosion at a chemical plant hit by a rocket on Monday in the rebel-held Donetsk Oblast has escalated tension between the two sides that have blamed each other. Since the cease-fire took effect on Sept. 5, the fighting has not stopped. The peace plan held on volatile ground despite reported violations and sporadic fighting between the two sides in the Donbas region.

Regarding the heavy clashes in the east of the country, Amnesty International released a report on human right abuses during the conflict. "There is no doubt that summary killings and atrocities are being committed by both pro-Russian separatists and pro-Kiev forces in eastern Ukraine, but it is difficult to get an accurate sense of the scale of these abuses. It is likely that many have not yet been exposed and that others have been deliberately misreported. It is also clear that some of the more shocking cases that have been reported, particularly by Russian media, have been hugely exaggerated," said John Dalhuisen, the Europe and Central Asia director at Amnesty International.

Since the fighting erupted, at least 3,660 people have been killed and 8,756 wounded in eastern Ukraine as of Oct. 6, according to a U.N. report on the deteriorating situation in Ukraine. The armed conflict has left many people in worsening humanitarian conditions as some armed groups continue to terrorize civilians in areas where the conflict has been continuing.

After the Russian annexation of Crimea in March 2014, tensions between pro-Russian separatist and Ukrainian forces escalated and turned the country into a war zone. As rebels began to seize government buildings and security services installations in the Donetsk and Luhansk regions in April, the Kiev government launched a counter-terrorist operation against the rebels.